The World In The Front Row

Talking with your friends about movies is always fun. But now, I have the privilege of talking to you, my online friends, who are literally from all over the world! And you all love cinema in such amazing ways. So exciting!

Judit is from Hungary but lives in London, and loves the great Hungarian work like the animations from the Pannon Filmstudió, and director's like Miklós Jancsó, Istvan Szabó and Nimród Antal. Dr. Sadiye Kuş is from Istanbul and thinks we should all watch "Bal" and "Vavien."
Lady Isis is from Bosnia and loves movies, especially the great Bosnian ones. Did you know Bruce Lee is an icon in Bosnia? Yellowgirl6 is from Israel and loves going to the cinema but prefers watching American movies, as most Israeli films are either about the army, or they're comedies, and she prefers horror and drama!
Désirée loves great Swedish movies but unfortunately there's not a lot of money in the industry there. She prefers watching movies in her home rather than going to the cinema, and she thinks Änglagård, Jägarna, Göta Kanal and Jalla are great examples of Swedish directors. Anna is also from Sweden, she loves Änglagård films but in general doesn't think that Swedish films are a good representation of the people.
Allyn lives in Malaysia and has found films to be great teachers of moral values; things like respecting your elders and taking responsibility. Allyn says that Malaysian films are good but don't always live up to expectations! Jeanie Black Page lives in Seattle, USA, and would love for us all to visit the Seattle Film Festival, as apparently it's pretty good!
Dlaydii explained that some pretty amazing films have been made in Australia recently. Australians have a different kind of humour; and usually, the films made there represent the people quite well. Lucy is also from Australia but lives in China now, where she finds that the best films tend to be the ones that are low budget.
Cucipata is always travelling around; and has recently seen films in South America, North America, Spain, Germany and Luxumburg, "There is nothing like watching movies in their original language, much of the culture is lost in every translation." 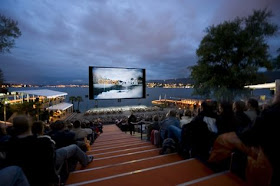 Neon is from New Zealand and tells us that cinema is very important to the Kiwi's, and that when they make a good film, "we basically brand it on our forehead when we go overseas." Filmmusic100 is from the Phillipines but is currently living in Nevada. In the Phillipines she prefers watching Soap Operas, but in the USA prefers watching movies.
Mirette says Egyptian films are a big chunk of their culture and represent the country well, but would prefer if they used more effects. Tizzy is in the UK is a little frustrated by how cinemas are dominated by Hollywood blockbusters and by the fact that even the English films now tend to have a more glamorous American style.  When she can, she goes to a very small cinema built in the middle of some woodlands, and apparently it's very quaint. Maybe she'll get us some pictures!
Elle is from Switzerland, and doesn't have much to say about their movies -- as film is not a big part of their culture, but the good news is that their cinemas are very clean!
Caterpillar is from India, where most people are movie buffs; and would also like us to know that films are made in every language that is spoken in India. Semi is also from India are refers to India beautifully as "the largest cinema watching and producing fraternity" and says "Cinema is our breathe, passion and life!!"
Robin is from Wisconsin, USA, and thinks that the cinemas there are a great place for a date, but would be a lot more happy if there were more anime films in the theaters. Cool.kid lives in Poland and loves Polanksi films and the films of Andrzej Wajda.
Shruthi wrote me a wonderful email which gave me a great education in Indian cinema and in particular the Tamil film industry. "Did you know that Tamil film actors Namitha and Khushboo have temples built in their honour? Did you know that every Rajini film is preceeded by fans bursting firecrackers, pouring milk over a giant cutout of Rajini, throwing money at the screen when he makes his entrance in the film." Film is an important part of the culture where Shruthi lives, as she explains: "From the bangles we wear to the jewellery to the saree blouses to the make up, etc, a lot of it is taken from film."