How We Fit In: The Future Of Our Art

A film is picture and sound, on a screen. That's it. That's all it takes. A Chaplin film was a man with a cane falling over in front of pretty girls. The most watched videos today are cats running into walls on Youtube, and big-breasted girls miming to music on the TV.

Watching a cat running into a wall is only funny the first four times. And the Miley Cyrus video is no more interesting than the Rihanna one last year or the Britney Spears one before that, they're all the same but with a new pretty girl. And we can't do what Chaplin did because it's hard enough getting your best friend to watch a three minute Chaplin clip on Youtube, let alone your own variation. 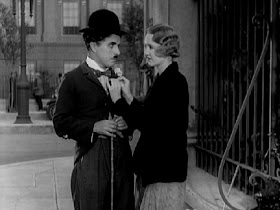 But even so: It's just things we see and things we hear. That's all it takes. The power is with us; the storytellers. The writers, the directors, the producers, the actors. We share this enormous power to do what we want, to bring it out into the world.

Look at this blog: I write about Jimmy Stewart and I write about my friend Henrietta and I write about making films with no money. This stuff isn't marketable, it's not part of a brand and it's not going to get me invited to the Oscars. But I have an audience, and it's growing every day, because people care about what I say, and because I care about what I say, and because I'm being honest, and truthful. And there are people like Mr London Street who write beautiful stories and people like Color Me Katie who inspire people with beautiful, exciting art. People respond because they bring meaning to the world. And they may only have a hundred readers, or two thousand, or ten thousand; but a few years ago they had fifty, or they had none. But people care about them now. They have longevity. They matter in people's lives. They'll be around for longer than the latest manufactured pop act and they'll mean more to people than the predictable action film I've already forgotten the name of.

We spend too much time being pissed at film studios who won't read our scripts, and director's who won't let us act properly, and investors who won't give us the money we need -- these are the wrong things to be focusing on. We need to be focusing on the bigger picture. We need to focus on the things that inspire us and the things that make us happy. If you love romance, why are you writing a 150 page script about car chases? Write a three minute film for YouTube about that girl you loved when you were fifteen. Why are you writing loads of three minute YouTube films when what you really want is to be making films like Woody Allen? We all gotta start, and we all gotta learn how to write and direct and act and design sets and do make-up and whatever it is that you want and have to do. But I think we keep getting sidetracked. We keep focusing on the problems; the fact our partner's want us to earn money, the fact the studios want some sex scenes, the fact the guy at the seminar said we need some action before page 4. How long have you been following this pattern? Is there something more you can do, to really do, what you want to do?


The Dogme films, a project started in Denmark - were about getting people to forget about money and forget about lighting and forget about special effects. Instead; they focused on telling stories. Some of them look like shit; they look like my Brother directed them. But they've got HEART, they've got TRUTH. They resonate. Just like the 'Mumblecore' movement in the USA. Some people hate them; they say they're just annoying white people moaning about their dating lives. But for some people, they're the best cinema in years; they RESONATE. They mean something. They mean everything. 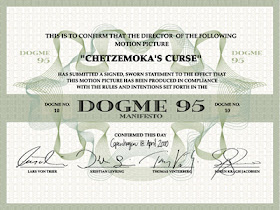 The Dogme filmmakers and the Mumblecore filmmakers took control of things themselves. They made everything about story. About creating things that reflect who they are. If you try to write something marketable, or if you try to brand yourself as an actor; you're going to fail. Because it means nothing. People see through it. Your favorite writers, directors and actors; they aren't where they are because of their branding. They're there because they found themselves and brought out the essence of who they are into the world. A lot of us start from a place of bullshit and waste too much time there; constantly shifting and changing and trying to be 'edgy' enough or 'quirky' enough or 'sexy' enough. Did you get into this work to be quirky or did you get into it to be yourself?

It's hard to be yourself at first. Why the fuck is this Elvis guy dancing around like an idiot? Why is this Spike Lee guy making films about black people? Why is this Chaplin fella falling over all the time? Why is Steve Martin's stand up really strange?  Why is that Twilight girl so moody?


“I would much rather have regrets about not doing what people said, than regretting not doing what my heart led me to and wondering what life had been like if I'd just been myself.”
Brittany Renée
Don't give all your power to the gatekeepers in Hollywood. They don't even know you exist. If you keep ringing them up and emailing their agents and begging them, they're gonna be fed up because they have no idea who you are. They haven't seen your ART, they haven't seen YOU, they've only seen the insane part of you that keeps begging and wanting and expecting. Go away and be yourself, find your audience, find your friends; and do the work. Make a movie. Make a screenplay. Make a cake. Make a cake, sell the cake, make a movie with the twenty dollars you made.

It's not about getting agents and producers and studios and Spielberg to give you an opportunity. It's about giving them an opportunity. Because you've been working on your art for twenty years; and to show for it you've got a ton of people who go insane for what you do.

Bruce Springsteen's Dad wanted him to join the army, Counting Crows toured coffee houses and washed dishes while all the record companies rejected them, the Farelly Brothers had their screenplay 'Dumb & Dumber' rejected by every studio and production company, Michael J Fox was told he was too small and too Canadian to make it in Hollywood. These people stuck at their art, they stayed true to who they are. And now they're major successes.

The world may seem like it's run by the people who greenlight superhero movies, and maybe it is. But meanwhile, there's a lot we can be doing and we don't need to feel oppressed, or depressed; or like outsiders. Instead, we can just make art and whether our audience is ten million people, or ten; that's exactly how it's meant to be right now and that's enough. Those ten people love you, and they're gonna tell all their friends, and their friends are gonna do the same.


"You're only given a little spark of madness. You mustn't lose it."
-Robin Williams
at 10:23
Share