The One Where The Kid Produces A Feature Film.

It was the day before shooting and we were on our way to pick up the equipment. We would have got it earlier in the week but we were on an extremely tight budget so had to do things as cheaply as possible.

To pick up the equipment we needed a van, but we didn't have a van, so the Director, George, got a van. He borrowed it from his friend. He said to his friend "I need to borrow your van for a day to move something from my house." He probably should have told him the truth, which was "I'm borrowing your van to go and pick up some unlicensed weaponry and Nazi uniforms." 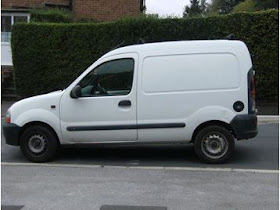 So the Director, George, said to me "should we pick up the camera first or the weapons?" and using my authority as Producer I said "I don't know, what do you think?" so he said "I'm asking you," and I said "can we get a cup of tea first?" We began arguing because he didn't think it was necessary to get a cup of tea but I told him I was really thirsty and that maybe we could pick up a bacon sandwich too.

So George was driving the van and I was sat next to him thinking about bacon sandwiches. We decided, first of all, to play it safe and pick up the unlicensed World War 2 weapons. But don't worry readers, they were de-activated. So we picked up the guns and put them in the back of the unlicensed van. I was a bit worried but George insured me that the fact he didn't have insurance for the van wouldn't be a problem as all we were doing was picking up some guns and Nazi uniforms for a film.

We went to pick up the Nazi uniforms, which was fun, except that George was unsure about some of the sizes. "I don't think that one will fit Michael," he said. "Who's Michael?" I asked. "One of the lead actors," came the reply, which led to me promptly scribbling on the call sheet. "Find out who Michael is and send him a schedule." George was convinced it wouldn't fit so he told me to try it on as I was similar in build to Michael, well I probably still am. 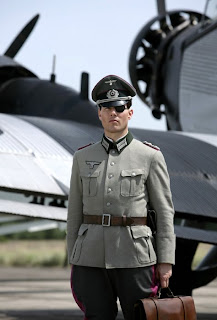 (this is actor Tom Cruise. Not Me. What I am saying, to clear up any confusion - is that I am not Tom Cruise.)
"It looks good," said George.
"I look like a war criminal." I cried
"Exactly."

At this point, George realised we needed to rush as we still had to pick up the camera kit and he had to be back home for lunch otherwise his girlfriend would go mad. "Hurry up and get in the car," he said. "But I just need to.." - he cut me off, "just get in the car and deal with it later," he said, which is exactly why I was still dressed in a Nazi uniform.

So we zoomed down the street towards the camera rental company-- and as we turned into a semi-busy road, a truck driver decided to pull into our lane--- he smashed into the side of George's friends Van, hitting the wing-mirror; which then flew through the drivers window, smacking him directly on the head, as shards of glass covered and cut both of us. George, being a wise driver, pulled us safely into the drive-way of a house. The truck driver disappeared and was never to be seen again.

So George and I got out of the uninsured van with illegal WW2 weapons, at which point a little old lady came out of the house and trundled towards the film director and the producer dressed as a Nazi.

As I wiped blood off of my head and George looked all the more dizzy, the woman said "We'll need a broom, we'll definitely need a broom. Clean away this glass. You're on my driveway. You're blocking my driveway."

"We just got hit by a truck," one of us mentioned.
"Oh right, but you're on my driveway" said the little old bag.
"I'm bleeding, I was just in a road accident." I offered.
"You need to move your vehicle," she responded.

We realised that our uninsured van was now pretty smashed up with the windows blown out, no wing-mirrors, and we were bleeding-- to say nothing of the rifles. The woman went to get her broom; and we realised we really needed to get the camera.

We'd never used this rental company before as they are one of the biggest in the industry; and with rental companies it's all about building relationships, so we wanted to wait for the right project - which we felt this was. So it's hard to explain us turning up to them looking like we'd just escaped from a bomb site.

"We'll help you carry this stuff to your car," said the helpful guy with a weird hairstyle. "NO!" we both yelled. We carried the thousands of pounds worth of camera kit and lighting gear and placed it through the non-existent window, in between a German submachine gun and a few authentic Lugers.

George and I headed back to his, doing our best to avoid any eye contact with people, or the many police cars we passed. "How about a bacon sandwich?" I asked George. He didn't answer.

The point of this story, in case you were wondering - is that you must never hire me as a Producer.
at 05:58
Share