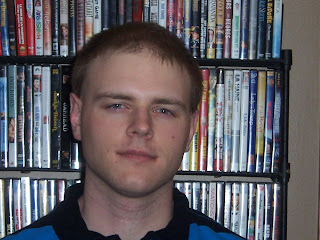 When my last few blog posts get no comments and all of my family stop talking to me, I realize I've hit a bad spell and I desperately need to get in a decent writer to fill my shoes, or a least my blog, for a day. Mike Lippert's blog is like one of those independent movies shot by a nobody for $500. Right now, no-one really knows about it - but the quality is so good that before you know it he'll have a hundred followers and everyone will be talking about his "big ego problem." Below is an article Mike wrote about being a Kid In The Front Row. Enjoy!

A lot of my cinema experiences have been negative: Stupid people, stupid movies, stupid long lines, stupid uncomfortable seats, stupid junk on the stupid sticky floors, etc. Yet, I cherish the experience of the theatre, no matter how advanced home technology gets, more than anything. When you really think about it, the theatre holds a certain inexplicable aura. When you go to the movies you’re going for more than to just see a film on a big screen.

There are the people. I love the people! Let’s get something straight: I hate being in crowded places, especially theatres as was the case when I went to see the Sex and the City movie in a cheap theatre with bad seating that was packed to the point where I found myself sandwiched between my girlfriend and some overweight middle-aged husband who was apparently having the time of his life.

There is a special section of my brain delegated to the memories I’ve accumulated over the years surrounding the complete strangers who I will never forget about out of the simple arbitrariness that they happened to decide to see the same movie at the same time as me. Sure, at the time I despised them more than anyone I’ve ever had the displeasure of meeting and sat in the dark, coldly wishing every cruel and unimaginable torture to befall them sooner than later. But now, looking back, I realize that these are the people who have etched certain films into by brain that would have otherwise fallen completely by the wayside.

There were the teenaged boys who needed to whistle as Kate Beckinsale peeled herself out of that leather suit (That would be me, -Kid.) in the Underworld sequel; the wife who thought that her symbolically challenged husband needed a complete play-by-play breakdown of Brokeback Mountain; the silly old Jewish man who must think life is just about the funniest joke anyone has ever told because he certainly laughed his way through absolutely everything in A Serious Man; the rowdy university freshmen who, with horn in hand, honked approvingly when Amy Smart divulged information of her triple orgasm to Ashton Kutcher in The Butterfly Effect, and of course, the old woman who, when Adrien Brody decides to take justice against Joaquin Phoenix into his own hands in The Village, loudly gasped “Oh my God! HE KILLED HIM!”

Then there is my favourite audience memory. It was during the packed premiere of A History of Violence, a film that the woman behind me felt was appropriate to take her 13 year old son to, which didn’t seem quite right until Ed Harris ends up getting his guts splattered all over Viggo Mortenson to which the kid exclaimed, “Cool, Spleen!” Right, it made sense now. And then, to the right of me were two jolly middle-aged sisters who thought everything in the movie was hilarious (I guess you just hit a certain age?), and declared, during the absolute best scene, where Mortensen goes to visit his brother, played brilliantly by William Hurt, declared, chuckling, “Aren’t you glad we’re not like that?”
There are many more memories where those came from. I’ve pulled them out and shared them for the simple purpose of trying to show why the cinema is such an important aspect of film. Critics sometimes get so caught up in theory and psychological pondering that they forget that the cinema is also, at its very heart, an experience, which is only half defined by the content that passes before our eyes on the screen. The other half is the conditions under which we see films: the who, what, where, when and why. Although, as a critic myself, I love the first, most movies just aren’t movies in the absence the second.
You can check out Mike's blog at http://mikesyoutalkingtome.blogspot.com/
at 01:25
Share