The first time you see 'Downfall' is a powerful, overwhelming experience. There's something uniquely fascinating about Germans exploring their own history on film. When English or Americans make films about Hitler or the Nazi's, there is always going to be an element of bias or opinion that seeps in -- but Germans making films about a topic which can still be very raw and present for them is... well, it's important. Important to the world, I think. 'Downfall' is a masterpiece. A powerful, riveting, and upsetting film that I think everyone should see. 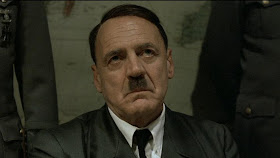 The problem is-- I don't think I could ever watch it again. The Adolf Hitler presented in that film now represents something very different to me, and it's something very funny. Who would have thought this could happen? I don't know who the first person to do this was, but they were a genius. For those of you who don't know what I'm talking about-- over the past couple of years, there has been a phenomenon on YouTube of re-editing scenes from 'Downfall.' To give you an idea, here is a recent one about the new Apple Ipad.

The beauty of them is that they are all completely ridiculous and nonsensical, but they are just so damned funny. Here are two twenty second clips that had me laughing.
And..

Fuck it, here's a third one.

I find these hilarious. I can understand that some people may find it offensive, that we're laughing along with Hitler - but I think most people agree with me. So why are they so funny?

The image of Hitler and what he stood for is one of the most recognised images in our culture. Wherever you are in the world, even if you are uneducated and disinterested in World War 2 -- chances are you know all about Adolf Hitler. There is something unique about World War 2 in that it will always get a reaction from people, they are sensitive to it. You could make a terrible documentary about Auschwitz, but it would still resonate with people. The images are too depressing and upsetting to not affect you. Likewise, the image of Adolf Hitler will always create a reaction. More often than not - it is one of disgust, or bewilderment, or anger.

These YouTube videos get big reactions. Say what you want about them, but they wouldn't be funny with anyone else in them. If it was Tony Blair from 'The Queen' nobody would be laughing. Sometimes I despair at how young people aren't interested in World War 2, whereas for me - keeping alive the story of what my Grandparents and their generation did is a big part of my life. But maybe these YouTube videos are the way that younger people can relate to what happened. I mean, if Hitler was just some random old German guy, these videos wouldn't capture the imagination of young people as much as they do.

The reason we find them funny is because the image we all have of Hitler -- everything we learned about; his obsession with war, with conquering Europe, with mass killing. So, the idea of him going crazy over Oasis breaking up, or going insane because Michael Jackson died is completely hilarious.

The thing about these Hitler videos is that, for the most part - they are very cleverly written, I laugh at nearly all of them. Whoever came up with these is a genius. I keep thinking it'll be tough to keep them fresh and original, but at the moment - I'm still finding them all funny.
at 02:07
Share