Barry Fremp has worked at the supermarket for six years and forty seven days. He is perceived to be the forth most knowledgeable staff member on low-fat yogurt products but he struggles with sauces, especially spicy ones, a problem he inherited from his father. Barry has not enjoyed his job in recent years as most of his friends have moved on. Some to the frozen chicken section, and Barry 'Killer' Bones was relocated to hair & make-up.

To put it bluntly, his job sucked. To put it less bluntly, Barry didn't quite feel the joy any more and often felt his life was drifting away. There was only one thing that kept him going. Anna Kantino, the beautiful girl on the fish counter, was not the reason. She refused to acknowledge him. The only thing that kept him going was those rare moments when he got to step outside of the mundanity and do something extraordinary. He got to take the law into his own hands. 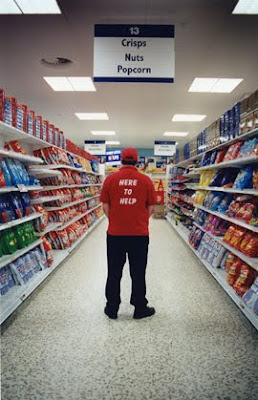 "Code Bacon!" came the yell over the speaker system. This was code for, "We have a shoplifter!" They used this innocent phrase so not to panic the customers, although people would often dive for cover if they happened to be browsing the bacon display when the call was made. Often, weeks would go by without a shoplifter. Until that fateful day that nobody would ever forget. It was a Wednesday, or maybe a Tuesday.
The announcement bellowed from above, "Code Eggs!". Barry gestured to the nearby customers to stay calm, as he had it under control. He sprinted to the entrance. A young, angry looking black man was making his way out with a widescreen TV. Barry dived on top of him and they went crashing to the floor.

Of course, he had the wrong guy. In fact, he had the wrong announcement. The meaning of "Code Eggs" is slightly different and actually means "please check that none of the fresh farm eggs are cracked." This wouldn't have been so bad if it wasn't the third person Barry had attacked after a Code Egg, meaning he now faced disciplinary charges which could mean a three week stint without a lunch break.

Barry often worried that he would miss a Code Bacon. This was unlikely though as he worked seven days a week except for major holidays, when he worked eight. Most people feared criminals coming to the store, but for Barry Fremp - it was the chance to be who he always knew he was, part security man, part private investigator, part spy, mostly the guy who refills the milk on the thing. The opportunity to be great was sure to be soon. Little did Barry know that opportunity would arise in the next paragraph.
"Code Bacon!" yelled the man at the front desk. Unfortunately the speaker system was broken and all that could be heard was the yell of "bacon!". This caused a stampede to the reduced isle where sixty four customers expected bacon slices at half price. As they fixed the system the yell again came for "Code Bacon!!!" - a moment Barry Fremp had waited a long time for. This was his chance to prove his place in the world - and to prove to Anna Kantino that he was a man with power. And if he couldn't convince her of that, it was at least possible that she would find out his name.

Harry Hibswald was known to locals as one of the most prolific and clever shoplifters of all time. He was still prolific, yes. But clever? It wasn't 1937 anymore, and Hibswald, now 91, knew it. His masterful plan was indeed one of the great plans of our time. The plan was to use a plastic bag to hide the alcohol he was taking. Sadly, he forgot to take the bag and he forgot to take the alcohol. In fact he would have been running from the building unknowingly innocent if it wasn't for the multi-coloured condoms he had accidentally stolen from isle five, when he casually put them in his pocket as a way of convincing another shopper, Mavis Pestrouse, that he 'still had it going on.'