A Trip To The Shopping Centre - A Short Story About English Malls.

A Short Account Of Shopping By Lenny S. Hipton.
I didn't have any interest in paint-balling until the man came up to me and asked if I had any interest in paint-balling. I still didn't but he gave me a piece of paper and said that me and eight friends could go paint-balling for only £200. I told him I only had a twenty and that was to be used to buy Caroline a very small bottle of perfume. He reminded me that paint-balling is only £200 and that the booking line is open 24 hours a day, except for weekends and when trying to get a refund. I refused to budge, which is probably why he kept talking to me, so I swiftly moved on and crashed into a girl who was selling pictures of people I didn't know in wooden frames for only £24.99.

As I began walking I saw an interesting clothing store wedged between two Starbucks', which were themselves lodged between another two Starbucks. I began pondering why there were so many Starbucks but soon grew tired and needed a coffee. I asked the man inside if I could use the coffee beans I bought at the store, a whole giant bag for £3.95. He said no so I bought a cup of coffee from Starbucks for £3.95.

After I left I again noticed the interesting looking clothing store which promised that all items were 50% off. I didn't know what this 50% was off of but I knew it'd be 50% cheaper than when it was more expensive.

I was greeted by a beautiful girl who was missing at least 70% of her clothing. She told me that there was 50% off all items that used to be 150% but all other items remained at 100%, unless there were no labels in which case you'd be charged 200% but only find out after you've left the store.

I decided to buy the black polo shirt which is a lot like the one my Grandmother wears except it had a little bird label on it so the beautiful girl said it cost 300%. I asked if there were cheaper ones without a small yellow label and she said "Do you want to look like your Grandmother?" - the girl then turned to a group of teenage men who were trying to get with the girls who were in the make-up store. The woman said they should cover themselves up in polo shirts with yellow labels or the ones with green labels as green labels will be 'in' from January.

The boys all bought polo shirts with green labels, and went to look for the girls they were trying to get with. The girls were also trying to get with the boys so they asked the lady in the make-up shop what they should spend their money on. The lady in the shop said they should cover themselves in make-up and tanning lotion that will make them look a slight shade of orange. The girls decided to become orange as they trusted the girl working there who was the first white woman ever to be also completely classified as 'an orange person' on her drivers license, passport, and Facebook. The girls admired this and immediately reapplied for passports. 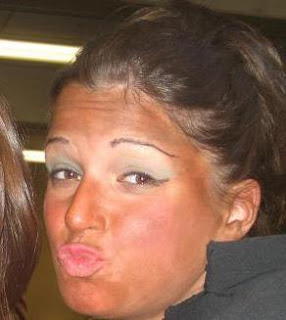 After this the teenage girls and boys went back to the food court where they originally agreed to meet up. Despite all waiting by the pizza place and intermingling, they failed to recognize each other and instantly hit the Gap store for some retail therapy.

After buying the polo shirts with labels and pleasant ornaments I realised I needed to buy some stuff to make Caroline smell a bit different, because that's what she wanted, for her birthday. She said that if I couldn't find her the one she wanted I should just get her a voucher so she can come to the mall to buy clothing with labels and ornaments and coffees from Starbucks or Starbucks. This makes her happy.