Mugabe and the White African - An Oscar Worthy Documentary - and something everyone should watch.

'Mugabe and the White African' is a documentary that everyone should watch. You might, like me, not have put much thought into Zimbabwe. You may, like me, have found yourself skimming over articles about Mugabe in the papers as you flick to the pages where some blonde girl is getting her breasts out or some golfer is fucking cocktail waitresses. But sometimes something comes along that really hits you in the gut, in the head, in the heart and in the mind. If any film is going to do that, it's going to be this one. I can't remember the last time I felt so aware of my privileges. Namely, the privilege of being in England, of being white, of having the rule of law, of having freedom. And yes, I know, you all know of a million reasons why we don't have actual freedom, but when you look closely at a place like Zimbabwe, you realize we're doing pretty well. 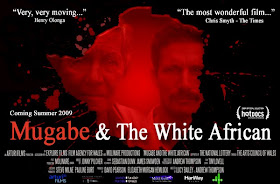 This is a very personal story. It's the story of Mike Campbell, a white South African, and his family. They purchased a farm in Zimbabwe after independence, when Mugabe and the government had little use for it, and then in the proceeding years the government wanted it back - and went to disturbing means to do so.

I absolutely stink at summarizing films, that's not what I do, so here's a word from Variety.
"Mugabe and the White African" compellingly documents the struggles of Mike Campbell and his brood to hang on to their Zimbabwe farm in the face of President Mugabe's "land reform," which apparently consists of kicking out whites and redistributing their property to his ministers, cronies and relatives. Braving intimidation and beatings, Campbell and his son-in-law, Ben Freeth, take their case to the international African court, charging racism and violation of human rights. Potent mix of suspense, pathos and indignation"
From the minute this film starts; you realize how at risk everyone is. Mainly, of course, the family who the doc focuses on are majorly at risk-- they're wanted out of their country. White farmers had been fleeing or forced out of their farms all around the region - the intimidation and threats being far too much for them to handle. How Mike Campbell and Ben Freeth managed to stay for so long, and remain so level-headed about what they were doing, and the reasons why, is truly remarkable. It's even more tense when you realize the black farmers they employ, are even more at risk - which is why you see so little of them in the documentary. To be giving information to the outside world would get them beaten or murdered -- in fact, one of the black farmers featured in the documentary has since been killed.

It's also incredible how brave the directors are (Andrew Jackson and Lucy Bailey). When you meet Lucy Bailey, she's a small, energetic and delightful woman who you wouldn't imagine being someone who would film without permission or safety in a country where all international media is banned. If that seems like an assumption or sexism on my part -- I guess it is -- but my point being, she's got more balls than I will ever have. It's inspiring and incredible what her team has achieved.

A criticism that this film will get is that it is not level handed. It does very little to provide general audiences with a wide understanding of the historical background to this conflict. And the film has a tendency to make you feel that Whites in the region are being oppressed by black people for completely wrong reasons. This is true, but-- at the same time, there is a lot of history and a lot of feelings, and at the very-base of what's going on, there are very legitimate regions why poor black people in the region feel oppressed and angry, and more could have been explored as to why people were acting the way they were to Campbell and his family.

But this film isn't a historical document, nor should it be- it's a startling, thought-provoking and important documentary about what is happening right now. And if the Academy recognizes what a huge achievement this film is - it could propel it internationally in a way that NEEDS to be done.

It's time to take down the curtains covering Zimbabwe. The film has the potential to have a huge impact on the country, and it is something that the World would no longer be able to ignore if this reaches the audiences it deserves, and NEEDS. Zimbabwe is a place without democracy, and more importantly - without the rule of law. As someone in the film mentions (I think Ben Freeth) - Zimbabwe is like a football or rugby match without a referee. It's a free for all, and innocent South Africans, of all colours, are in a game with no rules, except- it's not a game at all. There is violence, corruption and death in a way that myself and most of the people reading this could never imagine. We all have a duty, I feel, to be more aware of what is happening. We have the privilege of sitting here with a nice cup of tea and a sandwich, whereas the people portrayed in 'Mugabe and the White African' don't have that privilege - and I feel, at the very least, we should all watch this stirring, emotional and heartbreaking documentary - I have never been this moved by a documentary, nor more sickened.

Let's hope it gets the Academy Award Nomination it deserves. And let's hope it has the impact on the World that it is aiming for.