When I first looked at the programme for the Raindance Film Festival, I immediately picked out 'Missed Connections' as something I wanted to see. Why? Because tiny indie flicks about relationships are often my favourite films.

But then again, I'm just as likely to hate them.

When done well; these types of down-to-earth films can be highly relatable pieces that have some great insight into what it is to be a twentysomething or thirtysomething struggling to figure out what the hell you're doing with your life. You know the types of films I mean; like 'Once' and 'Your Sister's Sister'.

But when they're bad, they're bad. Highly indulgent nonsense about privileged white people who stroll around drinking coffee, talking bullshit and generally just being a pain in the ass.

So which of these was 'Missed Connections'? 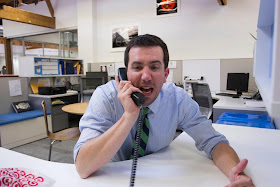 Well, I'll be honest with you. For the first twenty minutes, I feared the worst. I wasn't totally into it, I wasn't relating. It felt, dare-I-say, a bit run of the mill. Like, oh-here's-a-guy-who-got-dumped-and-now-here's-his-quirky-friends-and-now-he's-quitting-his-job-blah-blah.

And I started doing that thing that I sometimes do, which I hate, but I can't stop it-- where I start writing a review in my head while the movie is still playing ---- but then that stopped.

Because the movie grabbed me. And it grabbed me right at the point where the concept kicked in.

Neal's (Kenny Stevenson) friends have a theory that women on Craigslist, in the 'missed connections' section; are so desperate and lonely that they're almost certainly a sure thing, sex-wise. And I realise, as you read that last sentence, it'll sound shallow and like a typical American Pie guy-movie, but that isn't what this is. It turns out, the women in this movie are just as devious and messed up as the men. But to go into too much detail on that point would ruin the story for those of you who are going to see it.

Here's a clip from the movie:

But how, where and when are you going to be able to see it? This, of course, is the all important question. But first, let me go back a step, to how this film got made.

They funded it on Kickstarter. Well, it had a bit of private funding too. But mostly, they made their way on generosity. And it's great to see a Kickstarter project that works. How many people ask you to fund their projects? Hundreds. How many get the things completed and out there? Precious few. That's where 'Missed Connections' succeeds. And not only did they complete it, but it's great!

What was evident in meeting the cast and crew; is how much of a great team they are. It helps that the lead actors and co-writers, Kenny Stevenson and Dorien Davies, are married to each other in real life. And in Lisa Rudin they've found a producer who gets them. People go their whole careers without finding the right producer. But here, Lisa Rudin has managed the small miracle that so many people want: to make a great movie for $25,000.

It's directed by Eric Kissack. I don't have a lot to say about the direction, not because it wasn't great ---- it was --- but because, his style was unobtrusive, and simple (at least, deceptively). He lets the story do its thing, lets the actors have their space, and most importantly of all; allows the comedy to flow.

This is the type of film you go to film festivals to see. It makes the whole thing worth it. A gem of a movie, with talented everyman Kenny Stevenson and an intriguing performance by Dorien Davies. Go see it when you get a chance.
at 16:24
Share