Miley Cyrus - What Have They Done To My Song, Ma?

Are Miley's nipples showing? Is she not wearing a bra? Has she had surgery? Is she marrying that guy? Has she dumped that guy? Is she going out for groceries? Or jogging? Did she tweet? Is she not tweeting? Has she cut her hair? Has she grown it again? Has she lost her mind?

Or maybe we could focus on her talent. Because, believe it or not, Miley Cyrus can sing. 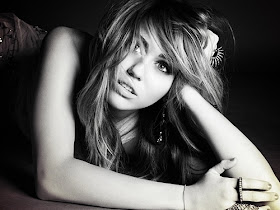 Once upon a time, I was ten. My parents would be sitting on the sofa, watching TV. I was in the corner, with the big giant headphones on; listening to my parents records. I would listen to EVERYTHING. I got to know every inch of every song.

I'm pretty sure my parents never really liked the song.

But I would always put it on mix tapes, force it on everyone. It was so simple -- a woman sitting there saying, 'what have they done to my song? It's the only thing I could do half right, and it's turning out all wrong, Ma'. Maybe this was the first time it crossed my mind that people interfere with music, that a lot stands in the way of an artist putting out their work. Maybe that song is at least partly responsible for me being obsessed with auteurs, artists and independent film. Or maybe I'm getting ahead of myself.

Anyway, I've not heard the song in years. And then I came across the Miley Cyrus version. When Miley covers a great song, I listen. Although we live in different worlds, and have, I would imagine, very little in common, it wouldn't surprise me if she was also a kid with the headphones on, listening to her parent's records. After all, her Dad is Billy Ray Cyrus.

Miley Cyrus doesn't get to be just Miley Cyrus. She has to go to the circus. Weird men follow her every move, snapping pictures. Every time she has an outburst on Twitter or shows an inch too much of her legs at a concert, it's headline news. It's not hard to see why so many stars go insane.

Luckily, when you hear her sing the way she does, you realise that her feet are still on the ground. Have you heard her beautiful version of 'You're Gonna Make Me Lonesome When You Go'? Her voice soars -- an amazing country music inflection; it's close to magic.

I love cover versions when they're done well. For Miley Cyrus to pluck 'What Have They Done To My Song, Ma?' out of nowhere, it must mean something to her. I can't stop watching and listening to this performance -- she's so into it. Isn't it the greatest thing when you witness someone truly loving a song? Especially when they're the one performing it. Wonderful.

For the briefest moment, when listening to this song. You remember she's just a young girl -- making her way in the world. And what is she? She's a singer. A singer who wants to sing.