I never actually mean to watch the 'Paranormal Activity' movies. In fact; I completely avoided seeing the second one. The third one I saw, last year, when I was in Barcelona with absolutely nothing to do.

Of course, there's always something to do in Barcelona. But, I was alone -- and there's only so much walking around I can do. I came across a cinema just down by where the boats hang out and I thought "movies, yes!" People often say to me, "how can you go to another country and waste your time in a cinema?" But for me, that's one of the big joys of other countries, experiencing their cinemas.

I saw 'Paranormal Activity 3' entirely in Spanish. I enjoyed it. The Spanish people in the audience found it scary, and I did too-- but for different reasons, and crucially, at different moments. The Spaniards had the luxury of understanding the dialogue, so they at least got some kind of hints that danger was lurking. I only had the music and images to lead me.

That should be enough, you'd think. But to be fair to the 'Paranormal Activity' movies, they're great at delaying the scare, hiding it away; keeping it until the one tiny millisecond when you let your guard down.

The reason the third movie made me jump, was because I had absolutely no idea what was going on.

I didn't really know what was going on today, either; as I watched 'Paranormal Activity 4' in London (and in English). It's fair to say that this is the weakest of the franchise so far. Okay, it's not fair to say that at all considering I never saw the second one. And to be honest, I think absolutely no-one knew there was a second one. I swear, hundreds of people have said to me, "Paranormal Activity 3? When was there a 2?"

Okay, it wasn't hundreds of people that said that to me, so I shouldn't swear by it. Maybe it was three people.

I finished a meeting early today, and found myself in town with nothing to do for a few hours. I was going to see 'Looper', or check out 'The Perks of Being A Wallflower' again, but the timings didn't work out, so I opted for PA4.

There were 10 people in the cinema. All of them were about 48, male, and bald. Apart from me. I am not 48 and I am not bald. At least not for the moment. But why were they all there? A few of them had notepads, so I was assuming they were journalists; but hasn't this movie been reviewed already? Maybe it was just a bald people outing, a day trip. But then, they didn't seem to know each other, so maybe not.

I was in hysterics throughout the film. Not because it was awful -- although, it kind of was-- but I was laughing madly because I was in the process of vividly coming up with a hilarious screenplay idea. I could barely pay attention to the movie because my brain was flying off into creative madness.

When I left the cinema, I completely forgot my screenplay idea. It probably wasn't very good. I should have written it down. Maybe that's why all the bald people had notepads. If I was 48 and bald; would I currently have a brand new genius screenplay idea in my hands?

I saw the first Paranormal Activity on 31st October 2009. I remember it very specifically, because it was Halloween and I was alone in New York City. Everyone I knew had plans, and I didn't know what the hell I was doing. It was my first Halloween in America; and I was in awe of it. Families filled the streets; everyone joyous, passing candy to each other, laughing and joking--- it was perfect, wonderful. Except that, I had no place to go and nothing to do.

I ended up in Chelsea, because I wanted to check out the Chelsea Hotel. It's a thing I do when I'm lonely; I feel a gravitational pull towards my idols, towards the ghosts that don't quite exist in the way you want them to. I was thinking of all the great writers and artists who'd stayed at the Chelsea Hotel. It was famous for it.

It was a let down, of course. I saw the hotel, but then what? I still had nothing to do. Everyone around me was full of life and happiness, and I was full of loneliness.

I headed further down West 23rd Street, and came across the Chelsea Clearview Cinema. And they were showing 'Paranormal Activity'. I had no place to go on Halloween, so I figured my destiny was to see this movie. 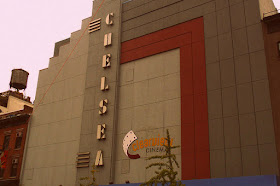 And I loved it! The screening was packed, and the audience was ALIVE! It made me realise why hype works in America. In the UK; when movies are hyped; we look at them and say, "uh, that was shit?" - but in America, people turn bad movies into great movies out of pure enthusiasm. A packed screening can make a movie great just through its energy and commitment to having a good time.

And the sold out screening of 'Paranormal Activity' managed, at least for 90 minutes, to make me forget how alone I was.

I kind of weirdly and quietly look forward to 'Paranormal Activity 5', because I don't know where I'll be -- but I'll probably end up seeing it, and I'll probably be alone.
at 12:10
Share