Something in the Air -11.40pm (after)I'm on the train and looking for people who are like me, anyone who shared the same experience. I want to know if they got what I got, I need to know how it affected them.To Find A Friend - 8.40pm (before)I was waiting for Tom Petty to hit the stage. A guy was selling Haagan Dazs ice-cream right by the door and I couldn't resist. Problem was, I was now in my seat with Petty due on stage any second, with an inedible rock-solid-ice-cold ice cream. The plastic spoon wouldn't cut it. I wanted it eaten and gone before Petty and the Heartbreakers hit the stage.I turned to the guy next to me. I said "That's one big drop." He understood. We're sitting in the circle section, our heads are pretty much on the roof. But we're the front row of the circle. If we lean forward, we fall into the stalls and our lives are probably over.Me and the guy get talking. It's good to make friends; we're two loners at a rock concert. We start talking about our favourite records, about different Tom Petty thoughts. It's experiences like this when you realise you're not alone in life, you're a part of something. My new friend asks, "when did you get your ticket?" 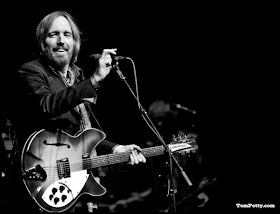 The Waiting - Monday Morning 9am (two days before)
The two gigs at the Royal Albert Hall have been sold out for months. Petty never tours in the UK. But I just HAD to see him. I called the box office. I said I'd take any ticket, in any seat, for either the Monday or the Wednesday gig.She said there was ONE TICKET, for Wednesday night only. Front row of the circle. I took it.Something Good Coming - 10.30am (before)My friend Charlotte is at mine, we have editing work to do, but all I can talk about is Tom Petty. I kept thinking in my head that she'd never understand, because how often do you meet a girl who understands Tom Petty? I made her listen to my favourite song, "It'll All Work Out". She loved it, and was open to more. I put on "Something Good Coming" and headed to the kitchen to make some tea. She stayed in the other room, taking in the song. There are few things better in life than getting a great girl into a great song. Unfortunately she's ten years too young and two hundred light years too pretty for me, but still; she loved the music!Running Down A Dream - 11.30pm (after)I couldn't find the tube station. I always get lost leaving the Royal Albert Hall. I decided to just RUN, I had so much energy! I was running to the sound of 'American Girl' in my head, with each lyric corresponding with a foot step----- oh-yeah-oh-right-take--it-easy-baby-make-it---last--all-night. I was like a kid, I was alive! I ran and ran and eventually found South Kensington Tube Station.Something Good Coming/Learning To Fly - 10.30pm
Best moment of my life right here. 'Something Good Coming' is one of my all time favourite songs. But I gotta be honest----The couple to my right were driving me crazy. Talking throughout the gig and using their phones; and they were in their sixties! I thought my generation was the problem? I wish I had the guts of my new friend on my left, who turned to the guy next to him and told him to shut off his phone, and too right! Petty was diving in to 'You Wreck Me' and the dude was trying to load a WEBPAGE! But then I witnessed a miracle. 'Something Good Coming' grabbed the whole audience. It was quiet, soulful, heartbreaking. The quietest song of the night, and it worked! Everyone was mesmerised! You just couldn't escape its honesty. Even the couple on my right were caught up in it. The song quietly and vulnerably and hopefully says "there's something good coming, there has to be". You feel the desperation. You feel the hope mixed with world weariness mixed with sadness mixed with a sparkle of magic. This song just stopped everyone cold and gave them a wake up call, I've never seen anything like it.Then came 'Learning To Fly'. Me and the new friend both let out these huge noises-- somewhere between relief, orgasm and just plain WOWNESS! This is one of those songs you just HAVE to hear when you see Tom Petty. 'Learning To Fly' has mellowed over the years. Used to be a radio friendly rock song, now it's a beautiful vision of what life can be; it remembers the past and looks to the skies in the hopes of a better future. At the end, the crowd repeatedly sung the chorus as Petty improvised beautiful lines, "I'll fly over my worries, fly over my pain", and we were all FREED! The beauty of the moment was undeniable. Live music changes lives.Gimme Some Lovin' - 10pm Petty introduced a guest.

He came on for two songs. The second was 'Gimme Some Lovin'" and it brought the house down. This was the present you don't expect which is hidden behind the tree. His voice SOARED!

Tom Petty is incredible. He has a quality and a magic that is undeniable. He's a master at what he does. He's in the league of Dylan and Springsteen but doesn't always get the recognition. The Heartbreakers didn't put a foot wrong all night. These are some of the best rock musicians in the world, who have, at one time or another, played with some of the biggest acts in music history. Tonight was special. I'd like to think it was for the band, too; you could see their joy when Winwood took to the stage, and when the crowd erupted after every song.
Tom Petty's music means more to me than pretty much anyone else going. There are so many disappointments in music --- but Petty remains, as he always has done, a true leader, an inspiration. He has more integrity than anyone in music -- and after a concert like tonight's, you realise what it means. He never whored out to the corporations. He never let the record labels dictate his art. Tonight was unreal; 'Listen To Her Heart', 'You Wreck Me', 'Free Fallin'', 'American Girl'; there's no end to the incredible music. I was listening to him on the way home, amazed by how many songs he'd left out, that's how good he is! With most musicians, there are two songs you're desperate to hear. With Petty and the Heartbreakers, there are sixty!

The band played with so much awareness, and everyone was deeply in-the-moment. It was great to see Petty and the band taking the time to connect with ALL of the audience. They continually turned to face the people behind the stage, in the restricted seats; it was a way of saying "we know you're up there, and we're here playing for you!" And it was great when Petty introduced the band. The music stopped and he just chatted; told stories of who the band were and how they came together. He probably does this night after night, but still, it was fresh and sincere.

Sincere. There's a word. Everything about Tom Petty & The Heartbreakers is sincere. 'Here Comes My Girl' - was there ever a better explanation of the far-out joy of saying to the universe "You know, I can tell the whole world, shove it", just because you'd rather spend the time with a great girl? And was there ever anything more defiant and strong than 'I Won't Back Down'? Tonight we got to be all the versions of ourselves. At times, I was in pure bliss. At other times, I was deeply locked into my feelings (good and bad), seeing life more clearly. And then there was 'Something Good Coming', which was transcendent.

I guess you could say I liked it.