"I'm in a rut. I'm a college student majoring in cinema. I've found myself studying and analyzing film more than trying to write them. I mean don't get me wrong, I've found a new passion and fervor for film analysis, but I miss the satisfaction of writing Fade Out. I'm hoping that this will get me jump started into writing again." I think that CHERYL BEADLING's reasons for joining the screenwriting program were things that a lot of writers -of all levels- can relate to, which is why I was so interested in working with her.

Cheryl was the least communicative of all the writers. Her instinct was to go it alone. Whether this was the right decision, it's hard to know. When it got to Friday, two days before the deadline, she hit a brick wall and couldn't find clarity on her idea. This led her to switch paths and write a completely different story. Which story was she meant to tell? I guess we'll never know. I sense that Cheryl wasn't looking for collaboration, but just for somebody to give her a deadline. Either way, a script got written, and that is why we are here! 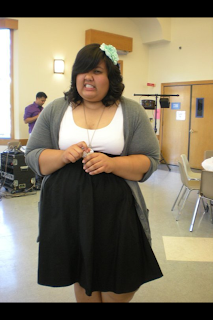 You hit a dead end towards the end of that week. How did it feel, can you describe it for us?


I hit a brick wall on Friday, and I hit it hard. Honestly, it sucked. I had a bit of an inkling that I would get stuck on my story, but I really hoped that it wouldn't happen. I found myself sitting at my local Panera Bread struggling to get pages out. I ultimately didn't know what my character's goal was, and what his end game was. Although I got most of the story down, there was nothing it led up to. I was writing for an ending where I didn't know what was going to happen. I think I hoped that as I wrote, the ending would come to me, but it didn't.

After your dead end; inspiration struck; what happened?

The inspiration for the second story ultimately came from my friends. Some friends and I meet up once a week for a writers group to workshop our ideas for scripts or pages of our scripts. It's a great way to get other people's feedback and ideas, and truly helped me this time around. At first I asked them to help me come up with a way to murder the main character's dog, but that jumped to the dog was already dead, to the dog was murdered by the main character's girlfriend, to this ghost dog solves crimes, to this man is now a dog whisperer. (Sometimes I don't understand how our conversations get to the points they do.)

Did the energy of this idea feel different to your original concept? Can you describe the difference?

After brainstorming with the group I felt inspired to write the dog whisperer story. They ultimately helped me narrow it down to the idea that if Cesar Milan had a little brother, who was also a dog whisperer, what would Thanksgiving dinner be like at their house? I felt like I was in a rut with the first story, but this one fueled me to continue writing. I marinated on it for a day, and came up with an outline Saturday, then wrote all Sunday. I had been sitting on the other story for a while, and I think the main reason why I hadn't attempted to write it yet was because it was hard trying to determine what the character's goal was. It was an interesting premise and a funny concept, but that didn't translate to being an actual story.

In terms of brainstorming with your with friends --- what did you do and how did it help?

I came to them looking for inspiration on how to kill off the dog, but they pulled me in another direction, which I think was good for me. I lost that fire to write, and brainstorming with them helped to push me through the next couple of days. I wrote down all of their suggestions and then focused on the dog whisperer. They helped me come up with ideas for the plot turns and gags. I then thought about it all for a night and came up with the outline of the story. The outline for this story came a lot quicker than the previous.

Did you enjoy being part of the KITFR screenwriting program? What did you get from it?

I greatly enjoyed being a part of the KITFR screenwriting program, and I am so thankful for the opportunity to participate. This was the first complete script that I have written in a while and I feel a new inspiration to start writing again. Because of the deadline, I had to force myself to finish the story, which is something I seemed to have lacked previously. I would start scripts, but ultimately would fall short in finishing them. This week made me push and produce something. Now, I plan to give myself personal deadlines for writing. I try to write each day, but I need to have a specific date in order to help push for my goal of a finished script.

You can read Cheryl's screenplay 'Top Dog, Whisperer' by clicking HERE.
at 08:52
Share