From Sunday 3rd June-Sunday 10th June 2012, I mentored six writers for the week. Their task? To write a screenplay each, which had to be no longer than 15 pages. Each day I am sharing the work of one of the writers, accompanied by an interview to hear about their experiences with the program. If you are a writer -at any level- I recommend reading these interviews, because I think they give a fascinating insight into the creative process. First up, ANTHONY ABATTE, from Texas, USA. Anthony had been carrying a script idea around in his head for two years, but had never done anything with it. Could we make a difference this week? 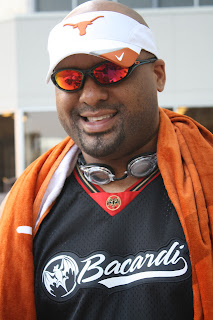 Anthony, I got a lot out of working with you. It really felt like we went through a whole screenwriting course together over the week. I think you improved dramatically as the week went on. Do you feel the same?

I literally can't believe how much we did in such a short amount of time. I was afraid that because of my long work hours, and the challenge of writing something comedic, that my script would be awful. Or, worse, incomplete. I have to admit, you knew what you were doing when you added this:

"If any of the writers don't complete their scripts by the deadline, Sunday 10th June, then I won't publish their scripts and won't take them seriously as writers again."

That was all I needed. After getting the positive response that you were glad I entered, there was no way I was going to let you or myself down. I had to get this done to the best of my ability.

You had a concept that you wanted to work with from the beginning. Tell us about it in a few sentences, and why you were so keen to do it.

About 3 years ago, I was joking with a friend about 2 other close buddies that just became police officers. We started to fantasize about what an over-the-top, TV version of them would be like. We wanted them jumping over the hoods of cars, shooting in slow-motion and established long-term, running gags. After "The Other Guys" was released, we gave up on the idea, thinking it was too similar. we never stopped talking about it and added characters, even the main drug dealer bad guy, that are all based on our real-life friends. The idea just seemed natural to bring to life.

On the final day, I made you go back and remove three pages to fit the 15 page criteria, how was that for you?

I've spent most of my life editing in some way, so, it was pretty exciting actually. I spent almost 6 years editing audio in radio, I've been editing my own writing for years and didn't think I'd get near 15 pages. After I saw that I went over, it became a challenge to cut the fat as quickly as possible. I felt like a reporter trying to get a hot story into my editor for the front page. It was great! I write better with a deadline.

This is your first script. I think it's amazing that you wrote it in one week! Does this give you confidence about doing more?

Yes, it does. Actually, since finishing this, I've just been fully inspired to keep writing in general. I've started doing film reviews and I want to continue the buddy cop characters that I introduced in this pilot script. I already have several episodes, characters and plots mapped out.

Was my input helpful? What did you get out of being part of the program?

Your input and this project itself helped me as a writer and creative individual. I've read the free book you posted online a while back and your tips for creative people quite often. Nothing has been more valuable than having something like this, requiring my immediate action. Your feedback was priceless. I also enjoyed interacting with the other writers and getting help on even the smallest thing, like how to convert my files into PDF and how NOT to do a cover sheet.This has been the best summer crash course I could have had, as a writer and a creative individual. Thank you again for the opportunity!

He is also on Twitter, and writes about films and other things on his Tumblr page.
at 03:40
Share