The Murdoch's and News Corporation Stand For Everything I'm Against

This is why I love independent voices.
The Murdoch's own EVERYTHING. They tell us what to think, what to feel. They own the news outlets, they own the film studios and TV stations. They own book publishing companies and radio stations and they even own sports teams!
But here are their two head honcho's, Rupert & James Murdoch, live on TV, being questioned by MP's. And they can't take accountability for anything! 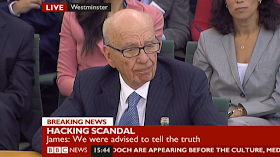 Hacked dead children's phones? Oh, we weren't aware!
Bribed police? Well it wasn't me!
It wasn't us, they say!
They asked Rupert Murdoch flat out -- is this whole fiasco because of him? "No", he said. He's not taking responsibility for his own company. But why would he? The corporations aren't about individuals.
Evil is traditionally known as dictators and murderers. But in this day and age, a big part of evil is the big corporations mass handling people by the millions.
News Corporation own big news channels and publications the world over. In the UK; The Sun, News Of The World, The Times. Look at this list. They provide the news to you in Australia, in Fiji, in Japan, in Indonesia.
But there's mass corruption. Back on July 7th I said, "The worst parts of this story aren't out in the public yet, it'll get worse before it gets better." And now we're seeing that happen. It's getting worse and worse.
So we have these guys who own our newspapers and TV stations and sports teams and film studios (they own half of 20th Century Fox) --- they own the world and when they're asked about all the disgusting things that happen in their organizations, they don't know! They plead ignorance!
And they've just been asked about "Wilful blindness." And they're shifting uncomfortably. 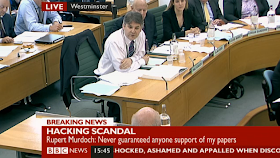 This is great. Because corruption in the media so rarely gets investigated. A blind eye gets turned, and the Murdoch's go on owning everything.
Maybe things are changing. The independent voices are more important than ever.
at 07:56
Share