A 2010 Bloggies Nomination, and Dreaming On A Bigger Scale.

I was never totally sure anybody would read this. But here you all are. And it's gotten me thinking and dreaming about the film industry. Let me try and explain without sounding completely insane.
This blog, Kid In The Front Row, has really been about me filling a gap I've found growing in recent years--- the gap of the story. The gap of the character with good intentions. The gap of writers who write through inspiration rather than set guidelines on how to sell a screenplay. I have been wanting, for a long time, a community of people who just want a good story, and who want to be inspired, and who want to write stories from their hearts. And it was then I figured, well I can try and start that myself. And that's what this blog was, and is, it's about finding Jimmy Stewart in the modern era. It's about writing from the heart again. 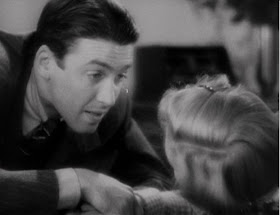 This blog is one of the five blogs nominated under the 'Best Entertainment Category' -- and of course, this is immensely exciting and unexpected for me - I never knew that people would be so interested in this. Through google followers and networkedblogs, this site has some great, active, readers-- not to mention the people on the film blogs groups and the lurkers who show up on my stats but I have no idea who you are. I'm glad you're here.
And the fact that this little blog where I ramble about Chaplin, and ramble about finding and nurturing creativity, the fact it's been nominated at all --- it gives me belief and hope that, on a wider, bigger scale, this is still what people want. And maybe, just maybe, on a big cinematic scale; maybe the return of Jimmy Stewart is near.
Okay, I don't actually mean the return of Jimmy Stewart. It's unlikely he'd be available and let's face it, he'd be worth a bigger paycheck than anyone else in Hollywood right now. But maybe people are yearning for a bit of heart and soul again. It's a tough one because upcoming writers are taught all these stringent guidelines now on what a film is, and what's marketable. But occasionally; someone ignores that and makes 'Once,' or 'Funny Ha Ha' or even 'Juno' - and it just hits you that, yes, this is what a movie should be about. This is why we love the movies.
I'm not entirely sure what I'm saying. I just know that I get some really wonderful emails from people and that people have gotten a lot from the interviews with professionals and from the inner-critic and writers block articles, and it's good to know that people do care - that they do love a good story and expression, it's not all about films like the one where Megan Fox's boobs flap about and big metal things collide with each other for hours.
Thank you for the nominations, and you can still vote for me for the next day or two to make me a finalist out of the five nominees in the 'Best Entertainment Category' http://2010.bloggies.com/. But bare in mind, if you do vote for me and I become a finalist, I will then ditch my love for cinema and instead become a fame-hungry, explosions-and-sex-scenes blogger, with predictable endings. You've been warned......
at 16:29
Share