Open-Air Screenings Bring A Slice Of Movie Magic To London.

I love open-air cinema. It's quite a rare treat in London because of the miserable weather. But any time somebody foolish attempts it, I always make sure I am there. Because when it does happen, it's magic. I get to live my Cinema Paradiso fantasy.
So this is Somerset House. 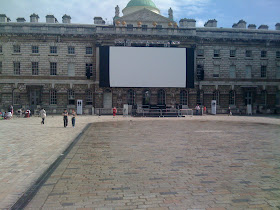 And here are film lovers. 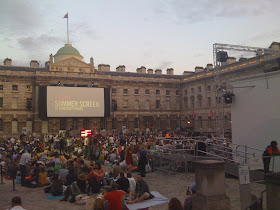 As the day began to fade, the smell of cinema was in the air. 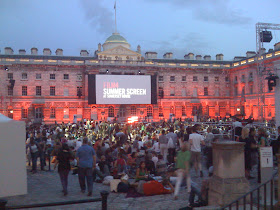 And before we knew it the time had come to watch 'Don't Look Now' (Nicolas Roeg, 1973) - starring Donald Sutherland and Julie Christie. Prior to the film we were treated to an introduction by
Steven Frears (Director, 'High Fidelity,' 'The Queen,' etc) 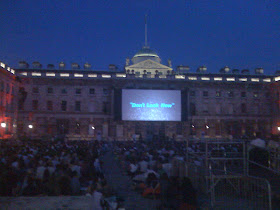 People were gripped by the classic piece of cinema, the beautiful
surroundings, and the rare London calm. 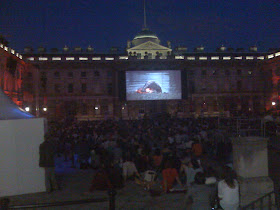 But for me, the best part of the night was in Covent Garden,
hearing this wonderful man since a bunch of Cat Stevens songs. 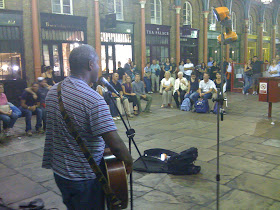 'Don't Look Now' is part of the Film4 Summer Screen series. With notable films such as 'Shawshank Redemption' and 'Slumdog Millionnaire' already screened, we're left with 'Strangers On A Train', a double bill of 'Cool Hand Luke'/'Road House' - and it ends on Saturday with 'Raiders Of The Lost Ark.'

Raiders is sold out but Thursday and Friday have limited tickets available on the door, from 5.30pm onwards. See you there. If you love films and are in London, this is the perfect way to enjoy a film, along with 2000 of your closest friends.