What do you want Mary, you want the moon?

"We came out of the cave. And we looked over the hill, and we saw fire. And we crossed the ocean, and we pioneered the West, and we took to the sky. The history of man is hung on a timeline of exploration, and this is what's next"
-Sam Seaborn, 'The West Wing'. 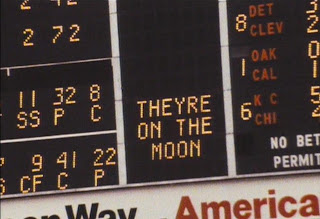 'In The Shadow Of The Moon' is a very simple documentary about something that to this day is still incomprehensible and unbelievable to most of us. It's about going to the moon.

I don't really want to say too much about it, and I certainly don't want to review it - I just want you to watch it. It's an inspiring documentary. Not only does it remind you of the most incredible achievement of mankind, but it makes you aware of many things you may have not given thought to before; how it happened because of the big dreams of John F. Kennedy, how the Astronauts felt guilt that they weren't in Vietnam because they were instead heading to the moon.. and many other fascinating insights into this small, incredible group of men who proved that anything in life is possible.

What I love about the documentary is how it doesn't over sentimentalise, nor is it too congratulatory; it just does what it should -- it documents.

It's really touching to hear the stories of this select group of men who are the only people in history to have seen the planet Earth in its wholeness from an alien land. What touched me most was Apollo 11 crew member Michael Collins talking about how fragile the Earth looked from space; how it's just this tiny circle hanging there in the middle of blackness, and also Jim Lovell talking about how you could hide the Earth with your thumb (as we see Tom Hanks do in the film 'Apollo 13', as Lovell) and you see the whole of life as you know it just disappear; Lovell realised doing this how incredibly insignificant we all are. 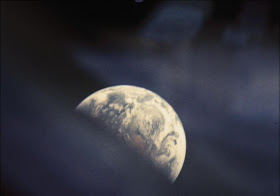 It's no surprise that the astronauts are all heavily religious or spiritual people. They have left the earth and adventured out into space -- and nobody has been back to the moon since. What an incredible group of people. 'In The Shadow Of The Moon' is a documentary that I definitely recommend; filled with archive footage and informative interviews with the people who were there, the people who made history.
at 08:16
Share