Not a lot slips through the net of Hollywood. But if you're lucky you can sneak in about Seven Pounds or so. 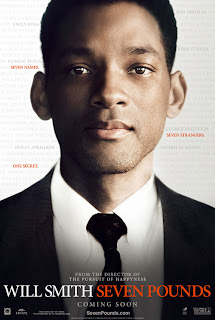 Having the flu has its benefits. It allows you to rent movies guilt free. Nobody is going to be suggesting you should be doing anything else, because you're ill. And when you're ill - you're allowed to watch movies.

My being ill has given me the excuse to basically do nothing for a few days -- but I did summon the energy to go down to the rental store and pick up some films. One of those films was 'Seven Pounds' - a film that I had written off; or had perhaps been forced off by the unrelenting bashing in the media, online, everywhere. But let me say this now; 'Seven Pounds' is one of the more wonderous films I have seen in quite some time.

How did this film slip through the net of Hollywood? It has subtlety, it has restraint, it's heartbreaking - and it's very moving. HOW? How did they manage to get someone in Hollywood to say 'Yes'??? Well for one, 'The Pursuit Of Happiness.' The team of Gabriele Mucino and Will Smith was clearly a golden ticket; having returned in gross quadruple the amount of Sony/Columbia's $55million budget. So if Will and Gabriele had told Columbia that for their next project they wanted to make a web series about an impotent donkey who runs the 100m at the Olympics, they probably would have got a go picture.

Luckily, rather than 'Donkey Gold' (which I claim ownershp of here and now) they came forth with 'Seven Pounds' - a film filled with something that is extremely rare in Hollywood. Namely, a beating heart.

This film had me confused, it had me guessing, it had me thinking, and it had me sinking in. And even though I figured out what was to come, it still had me gripped by the beautiful performances and the crushing complexities of the relationships. It was at some points inspirational, at some points upsetting. It was everything I want a film to be. I felt myself wishing I had written it. I'm a bit worried by the fact I continuously wish I had written the box office flops, butt that's a discussion for another time. 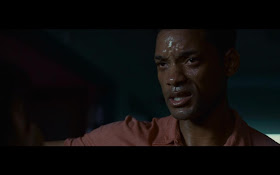 Rotten Tomatoes gives the film 28%, with typical opinions saying things like, "Soppy romance and excruciating piety cling to the film like bindweed, summoning the ghost of sobfest Pay It Forward, with the divine parallels of self-sacrifice taken to extremes of righteous absurdity." and "The worst movie ever to star Will Smith, this is a morbid drama which is meant to reduce its audience to tears of empathy, but reduced me to groans and helpless laughter."

I'll be honest, I didn't even know this word, mawkish, until just now. 'Characterized by sickly sentimentality' is what dictionary.com tells me. It seems like a lot of reviewers have jumped on the 'mawkish' bandwagon. But for me; it seems more likely that the people who found it overly sentimental or, worse, funny - are people who are not as in touch with their emotions as they might think. Some people just can't let a film bleed into them. For those people, we make 'Hancock'.

What's strange to me is that I feel this might just be a subtle masterpiece. But it's not the type of thing audiences want, or what they've become accustomed too. They say 'sentimental' like it's a bad thing. So what now? Should we settle for Will Smith saying 'Mothafucker!' and get Rosario Dawson getting her tits out for a glorious sex scene whilst Smith shoots a few bad guys; meanwhile Muccino can replace his beating heart with plain beatings; as Will Smith hits a few people and shoots a few others. The sad thing is, if Smith and Mucino work together again; they'll probably have too. Because after the long haul in cinemas, 'Seven Pounds' just about scraped in enough money to cover its budget. Which means that now when the team go to Columbia for money, they'll say "Maybe, we'll see. Does Dawson do nudity? Maybe We can get Anna Faris for the role. Maybe Will Ferrell is free too. We can put in some roller-blades." 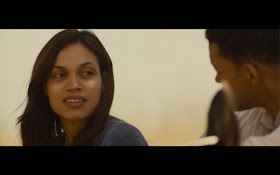 Go rent 'Seven Pounds'. Rosario Dawson gives a stunningly beautiful performance; and Will Smith is as good as he's ever been.
at 11:19
Share