Have you seen the latest Richard Curtis movie, 'About Time'? It's beautiful. It got slagged off in the press a fair bit. I remember skimming through some bad reviews and also a piece in The Guardian or somewhere where some feminist was annoyed that Rachel McAdams was in another time-travel movie where she didn't get to time travel, or something like that.

It's a wonderful movie. Richard Curtis movies usually are. Especially when his movies are about the human heart. I can understand why he's tried other stuff, it's that syndrome all great artists have; where they want to be seen for something other than what they are. But what Richard Curtis is, is a master of showing us how we love each other. He reminds us how important it is. You think we'd know that right? But watching 'About Time' I was reminded of how much I love my family, and of how much I haven't taken risks with the opposite sex in about a million years because I've been focusing on work and a whole bunch of other excuses too much.

And that seems a personal thing to share but then, if we're not sharing something personal then what are we sharing? What's the point? 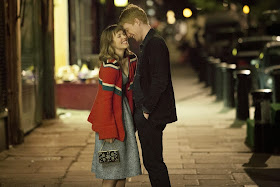 'About Time' begins with an instrumental version of 'The Luckiest' by Ben Folds, one of my all time favourite songs. And it ends on the proper song. Strange for me because 'The Luckiest' has a big personal history for me. I once did a video-footage compilation for a girl, with 'The Luckiest' playing over the top. It was a video of all our time together; the clips of us laughing and being silly and me thinking I was, y'know 'The Luckiest'.

Turns out I was dillusional. In a cloud. She was not deserving of this song at all. But because of that and a few other things along the way, I stopped being a guy who tried. Stopped putting myself into positions where, come the end of the day, 'The Luckiest' might be a fitting song for where we were at. I just closed off, focused on the other stuff.

But what else is there? You can achieve everything you want to achieve with your career, or earning money, but where does that leave you? Your money doesn't give you a hug at the end of a shit week and your career won't make you a tea when you're old.

This film reminded me that my grandparents (the ones that are left), won't be around forever. Neither will my parents or my siblings or me or my friends. The days dash by again and again and every moment is gone gone gone forever.

I'm so often guilting of just WAITING. Ever done that? Wait for things to happen. Wait for the film idea to come. Wait for the girl to text back. Wait for the shit friend to be a good friend. Passively ignoring the good and waiting on the bad. And where does it leave you?

Richard Curtis fascinates me. I tried writing to him once, I got an impersonal response from an assistant. And a friend of mine sent him some short films, they were returned with a letter saying Richard wouldn't watch them. And I saw him give a talk once - he was so removed from the realities of the industry, of the struggle, of all that. It's weird how your interactions with your artistic heroes are so disappointing. But then why do we try so hard to reach them? I had an interview scheduled with Stephen Merchant for this blog. He pushed it back for a year. It got delayed and delayed until, you guessed it, the release of his TV show. He answered it along with all the other press, through his assistant, I never got that personal connection (here's the interview, it's not one of my best).

I'm on a tangent now. I guess my point is: the great artists, their kindness is in their work. Curtis has given us important gifts like 'Four Weddings and a Funeral', 'Notting Hill' and 'Love, Actually'. Why should I want MORE from him? He's given so much. 'About Time' is the best film I've seen in ages. I know you disagree with that choice of 'best film in ages', but who gives a shit? It resonated. That's all that matters.

"Next door there's an old man,
Who lived to his nineties and one day,
Passed away, in his sleep.
And his wife, she stayed for a couple of days,
And passed away.
I'm sorry, I know that's a strange way to tell you,
That I know we belong."