I re-watched the film 'LIFE' (1999, Dir. Ted Demme). And it's a film I've always loved. When you have great comedic talents like Eddie Murphy and Martin Lawrence, all you need is a good concept for them to wrap their brains around and a director to give them a playground to work their magic in -- and that's exactly what 'Life' was.

That's what I love about Eddie Murphy, just seeing him go, seeing him riff on ideas. The guy is hilarious. And I know he's seen as one of the comedy greats, but still I think people don't realise just how exceptional he is. 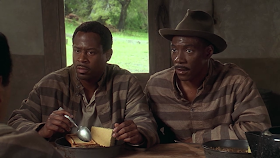 And sure, people talk about how Murphy's career has nosedived, but to me, his career is HUGELY impressive. How many actors can sustain such a high level for thirty years?

Give Murphy a decent box of toys (a script, a good director and a talented cast) and he'll still produce the goods. Same for Martin Lawrence.

It just so happened that we were a little more lighthearted in the 90's. No-one would claim they're classics, but 'Life', 'Bowfinger', Nothing To Lose', these movies are endlessly re-watchable, full of hilarious moments.

But what gets me about 'Life', is that I've known this film for 14 years. In the movie, Murphy and Lawrence are serving life sentences for a crime they didn't commit. Just as we get comfortable, there's a flash-forward to '12 Years Later'. When that happens in a movie, it just seems like a cheap device, but then you realise, your life works in exactly the same way.

Your life flashes forward twelve years in a heartbeat. The characters in the movie age and so do you.

And it flashes forward again, and we see shots of characters evaporating, indicating that they've passed on. And one of those was a character called Jangle Leg, played by Bernie Mac. And it makes you realise how much you miss Bernie Mac, another unique talent who died way too young. 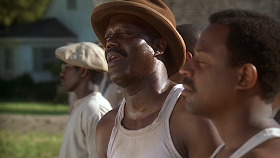 You look at Eddie Murphy and Martin Lawrence and Bernie Mac, and you see a bunch of guys having a great time, making a great movie, and they're in the prime of their lives. And I bet they didn't even know it. Most obviously, of course, they didn't know Bernie's time here with us would evaporate so soon.

Life flashes by 12 years at a time. And just as soon as you've gotten used to that fact it flashes forward another 24 years. You may think  the age you are now is the age you are now, but a blink of an eye and the decades just fall away. 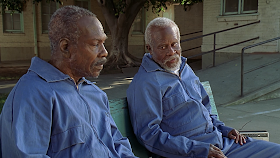 In 'Life', they're imprisoned, but you and me, we're free. At least that's the idea, but how much have you changed or grown in the last 12 years? It's shocking to me how, in so many ways, I am exactly the same, making the same mistakes; holding myself back in exactly the same way as I did in 1999. We don't need big metal bars, we all have our own prisons-- our own limitations, be they psychological, environmental, financial. I look at the same dumb errors I make in relationships, in my career, the same fears and roadblocks in my life that are put up by nobody but me.


You can want any life you want but if you don't change your habits, if you don't work on your limitations, you're nowhere, stuck in a life sentence.