It's not that making a film for $25,000 is impossible, many have done it. But how many of them are good? LISA RUDIN managed the small miracle of producing a feature film on a tiny budget that was actually GREAT. You can read my review here, or you can talk to the many hundreds of people at film festivals who have been lucky enough to get to see it.

When a great indie film is made for virtually no money, we have a tendency to to shine a light on the director. How did they do it with so few resources? The truth is, it's an impossible task. That's unless you have a great producer, which is precisely why I wanted to interview Lisa Rudin. 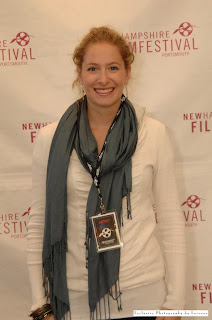 You made 'Missed Connections' for around $25,000, is that right? What was your budget after marketing, festival entries, and all that kind of thing?

'Missed Connections' was made for $25,000.  We raised nearly all the money through two Kickstarter campaigns. The first one supported our initial production costs and insurance.  The second one helped us finish with production and left money for post expenses.  Our marketing budget was less than 1K.  We had a company print posters and postcards which we designed with the help of a couple talented friends and developed a website on our own.

The festival entries can get very expensive on the other hand.  We needed a few thousand dollars for entry fees, although some were waived.  Another hefty expense was the cost to travel to fests.  Not all of them cover travel costs and those that did were usually willing to cover travel for one person.  We are a four person filmmaking team (Eric Kissack - the director, Kenny Stevenson - the writer and lead, and Dorien Davies - the female lead) so we're all broke now, but it was worth it!

On a script level - what makes a good independent film? What makes you want to produce something?

Great question. Dorien and I were friends and she mentioned to me that her husband had written a script.  I read it and met with them.  I loved this script because it was so clever and funny.  I asked Kenny if his goal was to get managers or agents to read it and if he wanted my help in doing that.  He said no.  He wanted to make it himself.  I was just crazy enough to be convinced.  He explained that he wrote it with his friends in mind and from there we did a table read with all of them.  They were all so talented.  It was perfectly cast.  I introduced them to Eric and he felt the same.  I knew we had something special.  The actors were perfect for their parts and it really flowed.  Because of the nature of independent film, you need to have extra passion to make up for the lack of money.  This project had it and I could see it in this group.  It was an easy sell to get me on board.

When producing - do you tend to be on set every day?

I do.  With indie films there seems to be a lot more room for little fires.  We had lots of days where unexpected issues popped up. This is the nature of shooting without permits and with no money.  You have to get very creative!  We had a day where the grip truck didn't show up.  We had a day where we were stopped by the police.  We lost power for a few hours one day.  You never know what can come up, and unfortunately you don't have money to throw at the problem.  Because of all this, I find it helpful for me to be on set.  Eric was directing and needed to focus on that aspect.  We are a good team and he trusts me.  I might not always alert him to a problem, but he can be sure that if there is one, its being handled.

You've worked as an assistant to Larry Charles on some amazing projects -- what did you learn about comedy from him --- and from Larry David, Sacha Baron Cohen, and Bill Maher..?

I have been very lucky to work with such talented people.  A lot of the projects these guy do are improv heavy.  Over the years, I've been able to watch that process and have really enjoyed seeing actors work on projects that allow for flexibility with the script and characters.  I tend to be more interested in projects I come across that incorporate that element.  In production this can sometimes translate to scenarios that you didn't expect.  On some of the projects I've worked on with these guys, we had limited resources and a lot of changes to our schedule, location or set needs.  You have to think fast and be resourceful in these situations and I learned a lot from those experiences.  I drew on all these lessons while making this movie.

The film is doing really well at the film festivals -- what has it been like travelling around with the film? It's like being on tour in a band, right?

Oh yes, just as wild and crazy...but probably not in the sex, drugs and rock n roll aspect.  It's been a great way to see the country (and London!) and to catch up with friends and family.  That has been a really special experience.  Nothing better than travelling with your film to new audiences and watching people laugh and enjoy it. 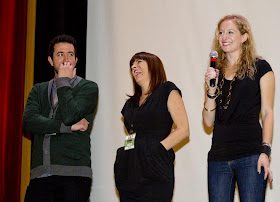 How do you find material you want to produce -- how does it get into your hands?

What's next for you?

I am currently working on a couple shorts and the four of us are working on selling 'Missed Connections'.  We are also discussing a new project...  We shall see.

The internet is playing a huge part in every stage of production. In what ways has the internet been important to you?

What can you tell us about distribution? Is anything lined up?

Yes!  We have deal in place with Film Festival Flix and will also be in places like itunes, Netflix and other VOD and cable platforms in early 2013.
at 11:10
Share