Myself and Pete, or Pete and I, or however you're meant to say it, or rather, write it; headed down to the Apollo Cinema in Piccadilly Circus this afternoon for the final few films of Raindance.We picked a German movie, called 'Heavy Girls', and it might just happen to be my favourite film in quite a fair long while. It's not a film I can review in a traditional sense, as my reviewer-faculties completely shut down while I watched it because I was drawn right into its world, there was no space for any other thoughts. The actors, and the characters they portrayed, were wonderful. The whole audience was caught up in what was happening on screen.'Heavy Girls' is a feature film made for €500. It was shot in the style of a Danish Dogme film, or one of those Andrew Bujalski movies. The director ditched all those rules such as, y'know, having lights, having catering, having an editor. Instead he got two actors and his 90 year old Grandmother and made a film.Ruth Bickelhaupt is 91 now, 90 when they shot the movie -- and it's her feature film debut. She was so sweet, so hilarious-- the warmest and most engaging screen performance I've seen this year. And I mean that.

The film is so down to Earth, so amusing and just so darn joyful to watch. The writer/director has talent, huge talent; you don't make a movie like this without a wonderful aptitude and sensitivity for storytelling.

Ruth was at the screening. It's amazing how you can not know a person, then 90 minutes later a 90 year old is your new acting hero.Oh Raindance how I love you for introducing me to this film.After that we headed upstairs to look at the big board of movies, and there were only a couple left. We went with Serbian film 'Body Complete', and I can't tell you what it's about. That's maybe because I'm suffering from film burnout; I'm tired, zzzz, and have seen an unreal about of films this week. And I got the feeling that even though the film was about an important topic, and trying to convey something about Serbia, and Bosnia, it just wasn't done all that well.Most of the movie, Nicole (Asli Bayram) was just strolling around looking for a girl who went missing years ago. Like, she'd visit a place, ask if they've seen her, no they haven't, so on she went to someone else and again and again until the movie ended. 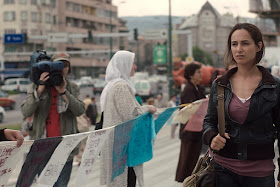 But maybe I was just exhausted. An extremely gorgeous woman was sat next to me in the screening -- and she started talking to me before the film started but, this is how exhausted I was, I didn't even engage in conversation! My dream woman slipping from my grasp all because of film burnout.

After the screening, I was feeling a bit down due to 'Body Complete' and it's unhappy ending, so I demanded we go to the Charles Dickens coffee house for a slice of Apple Pie and a cup of Tea. Oh, and I mean I demanded it of my friend Pete, not the girl in the cinema, who was by this time probably already in a passionate embrace with her boyfriend Johan. 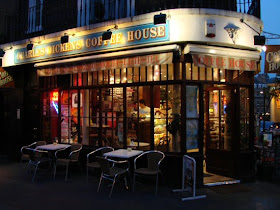 Covent Garden is wonderful of an evening, especially with Apple Pie and especially at the Charles Dickens Coffee House. They warm up the pie just right, you eat it quickly with a fork, and then you wash it down with a cup of English Breakfast tea. It's how every London evening must end.
at 14:10
Share