GROUNDHOG DAY: A Masterpiece of PREMISE and CHARACTER

The reason that GROUNDHOG DAY is so funny and has lasted for so long as one of the all-time great comedies, is how intricately it is put together. The problem with most comedies is that the structure and premise are not given due attention. Writers latch on to an idea and use it as a jumping point. But the best films are built around the premise. If you set the film up in the correct way, the structure and rules don't limit you, they free you.

The first eighteen minutes of the film are not actually particularly funny. In fact, if it wasn't for the charisma and humour of Bill Murray, it's possible you would be bored. What the opening of the film does do - is plant in the key concepts which the film will keep referring to again and again and again. 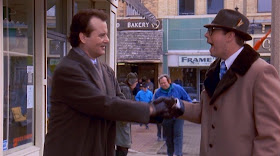 The second time Phil Connors (Bill Murray) experiences Groundhog Day is when the film really begins to deliver the laughs. The concept is a funny one, 'what if a guy had to live the same day again and again?' --- the second walk-through of the day delivers on this joke. Most movies peak at this moment-- they have a humorous set-up, play out the joke, and then run out of ideas. It's why most rom-coms, despite sounding clever in a pitch meeting, end up being predictable run of the mill movies.

When the audience knows the world your film is set in, you can take them anywhere, as long as it stays within the confines of the universe you've created. In 'Groundhog Day', once the audience knows that they're going to be seeing the same day again and again -- the director, Harold Ramis, was free to dive into different scenarios without needing to set them up each time. This is why your premise, and how you deliver it, has to be perfect. This is the difference between great comedy and average-to-poor comedy. It's like when I wrote recently about 'The Watch' and 'Ted' - they're lazy and hacked together. Like the writers thought "Oh, a guy can't get rid of his bear, and a bunch of neighbours protect their hometown from aliens," and thought that would be enough, but it's about so much more than that to produce a stand-out comedy.

Another thing that 'Groundhog Day' has going for it is, of course, Mr Bill Murray, in what is surely the defining performance of his career. The crazy thing about his miserable, angry character, is that we can relate to him! Despite the supernatural thing he is experiencing, of living the same day over and over, we realise that it's not too far from our own experiences. Most of us go through months and months of seeing the same people, having the same conversations, facing the same problems. Despite the ridiculous situation Connors is in, it's also surprisingly normal.

PHIL
What would you do if you were stuck in one place, and every day was exactly the same, and nothing that you did mattered?

GUY IN BAR
That about sums it up for me.

As Phil grapples with his bizarre situation, he is plagued with concerns about the meaning of his life, or lack thereof. His concerns are specific to his situation, of living the same day again and again, yet miraculously, they are all same issues we all face, day after day. At various points in the film, Phil finds temporary freedom - through driving on train tracks, manipulating dates with Nancy, and eventually -- through killing himself. These troubling yet hilarious moments give us a great insight into Phil's character, and they also strengthen the premise. We realise, this guy really is stuck in a predicament, and nothing he does matters. You could argue that the movie has atheistic undertones--- if life is meaningless, what exactly are we meant to live for?

The perfect construction of the film's premise allowed for so many delightful moments that wouldn't have been possible without it. A perfect example is the morning after Phil is put in jail. Despite being miserable in his repeated daily existence, he is ecstatic about being a free man again. He comes down the steps and talks to the woman from the bed-and-breakfast place. Before she can offer him coffee or ask about the weather, Connors answers all the questions, because he's heard them countless times before. This joke was set up in the opening stages of the film, and repeated throughout. Comedy is like lego, you have to build the pieces and make sure they fit together perfectly. It's also about repetition. 'Groundhog Day' is pretty much just five or six scenes being repeated again and again, but they're different each time because of the plight of the character. (If you're interested in these elements of comedy, I recommend you read my blog post about Billy Wilder and I.A. L Diamond's 'The Apartment' and also read the screenplay).

Then we have Phil Connors in the coffee house, with a plethora of cakes and pancakes and cigarettes -- throwing caution to the wind. He made the choice, which I must say is an extremely tempting one, to live a life full of eating bad food and not giving a crap about anything. Again, he is forced into this viewpoint by the premise of the film, yet it is also something we relate to in our monotonous, repetitive lives. If I eat a giant cake today, does it matter? If life is meaningless anyway, should I smoke some cigarettes and have another pancake?

'Groundhog Day' is a fresh take on a tried and tested notion that any day could be our last, and that it's about making the most of life. To quote the title of a new film staring Dakota Fanning, "Now is good". Of course, we all know that now is good, but we need reminders. We need movies to drum it into us.

The thing about Phil Connors is that he is so unaware. He thinks he's above the work he's doing, being forced to travel to see if a rat sees its shadow. He's dissatisfied. And he sees the repeating of each day as a punishment, as another thing he has to get through. Isn't that how we all see most of our days, as something we have to get through? So he tries to manipulate the situations, by stealing money, manipulating women to go to bed with him, killing the groundhog.

Come the end, there's only one thing Phil hasn't tried: being genuine. Getting coffee for his colleagues, taking piano lessons, trying to save an old man's life. What makes this so powerful, much like in his miserable moments, is how strongly we relate to it. We want to be people who look out for others and follow our passions and be kind to strangers; yet we always get grumpy and delay it-- we think we'll be the great versions of ourselves tomorrow, or next week, or after a trip to Spain or whenever it is we get enough sleep. 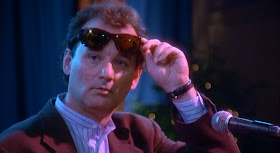