My brain hurts. It hurts because of how much this movie made me think. And it hurt even more when I began trying to figure out how I would review it.

You have to be paying attention when you watch 'The Lottery of Birth'. There's no dumbing down, no spoon feeding you. It's a film that relentlessly sets out to challenge your perceptions and view of the world. It's a documentary that takes what you think you know and shows you how you know very little. It could so easily have been pretentious, or preachy, or boring-- yet somehow, it manages to tread that line perfectly. It doesn't make you feel dumb, it makes you feel enlightened - which is exactly what you want from a documentary. 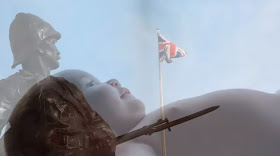 So what is it about? Don't expect me to explain; my brain still hurts too much! Let's all watch the trailer to get a feel for it:

Depending on where you're born, you have certain privileges, certain obstacles, certain opportunities. Your outlook, your inner state, your beliefs; they're shaped by the environment you're in. And we all conform to roles almost as quickly as we're born. And school drills into us a certain way of thinking, a way of viewing other nations, a way of perceiving history. One of the most startling moments in the film is when it lists fifty nations that the USA has tried to overthrow since World War 2-- and many of them were democracies. One of the big points the film makes is that, we all feel like we're on the side of the angels. We like to believe that our nation is the one in the right, the one with great values. 'The Lottery of Birth' takes a look at how our brains are wired to think in a certain way, based on the way we've been socialised.

This film is a wake up call.

And the interview subjects are fascinating. The late Howard Zinn is mesmerizing; as are all the others.

This is a documentary that, with a mere establishing shot of a London city office or a New York City street, makes you realise how brainwashed we are, how easily we allow ourselves to be obedient. I related to this documentary in a big way because it voiced a feeling I've had eating away inside of me for a long time, that I've never been able to formulate into words or coherent thoughts. It just shows you how powerful a documentary can be. It's like a switch has been turned on, the electricity is flowing -- now I can begin to look at the world in a way that I've been working my way towards without direction. 'The Lottery of Birth' is the beginning of a new way of approaching things.

Yesterday, during a screening of 'Loveless Zoritsa' I was getting pissed off with the woman next to me who was constantly scribbling notes --- it bugged the hell out of me! But today, as I watched 'The Lottery of Birth', I wanted to be taking notes so badly! There was so much to take in, so much to learn, endless things to ponder.

I'll need to watch this film another three times to take it all in. Problem is, when, and where? Documentaries never have a certain path. After Raindance, we don't know when we'll see it again. Luckily, the filmmakers are intent on it reaching a wide audience. They said during the Q+A that the important thing is that it gets seen, even if people can't afford cinema tickets or to purchase it on demand. How refreshing! Film distribution is changing -- and it's very likely that the producers who are open to giving their films away for free may end up being the winners.

The important thing is that 'The Lottery of Birth' gets seen. I'm fully aware that despite my praise, this review doesn't give much detail about the content of the film. I go back to my initial words -- my brain hurts. This is a talking heads documentary that takes up more neurons in your brain than a hundred Hollywood flicks combined. Sound like hard work? It is. But it's worth it.

I don't know when you'll get a chance to see it, but when you do, make sure you don't miss it.

Additional Notes: The film is directed by Raoul Martinez and Joshua Van Praag, and it's the first of a four-part 'Creating Freedom' documentary project. Keep an eye on this series, because it may end up changing your life.
at 10:46
Share