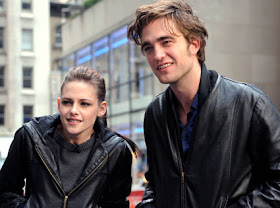 Why does anyone care? People cheat on people all the time. Kristen Stewart is no worse that Shelly who lives down the road from me and cheated on her husband of fourteen years with a man called Bill. Is Kristen Stewart evil? No, she's just an actress. Does it matter that Pattinson moved in with Reese Witherspoon? Not at all. My neighbour Shelly moved in with Andrea Fleck, who works in the local Pizza Hut. What's the big deal?

Oh no, wait a minute -- will this ruin the promotion of the new Twilight movie? No, it won't. It's part of their job, to go out on the road and say 'Oh my God it was so great working with these wonderful people and the complexity of this movie made it something really special'. They'll be fine. Are you telling me you've never worked with someone long after they hated you because you're an asshole?

Will Robert Pattinson forgive her? I'm still pissed at the way Kristen treated Jesse Eisenberg in the movie 'Adventureland', but we have to move on. If he does forgive her, they'll get back together. If he doesn't, he'll date another hottie who will turn out to be the love of his life. That's how it goes.

They're just like all the people you know who cheated on all the other people you know. The only difference is they're rich, and one of them is a vampire. There are far more important things happening in the world, like the plight of Katie Holmes and the latest season of 'Keeping Up with the Kardashians'.