RIP NORA EPHRON - You Are a True Hero Of Mine

I didn't see this one coming.

Nora Ephron has had a bigger influence on me than nearly anyone else in the industry. I grew up watching her movies. She was the first writer/director who I sought out film after film. I just loved everything she did.

I have watched 'You've Got Mail' more than any other film.

And 'Sleepless in Seattle' is responsible for what has become a lifelong love for the romantic comedy.

You see, guys aren't meant to like the rom-coms. We're meant to disregard the chick flicks. But Ephron was able to transcend that; at least for me and a lot of guys that I know. 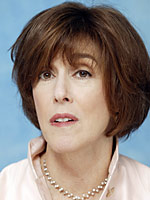 In the modern era, films have become awfully dark and cynical. It's remarkable whenever someone can make something that blooms like a flower and makes your day a little better.

The first time I went to New York, I visited for a week. I spent the whole time at 'You've Got Mail' locations. I was staying with my friend Jenna, and I'd say "come meet me at Cafe Lalo!". I was obsessed.

'Hanging Up' is such a poignant tale about life and death. It's one of the all-time great Walter Matthau performances. He died months after filming it. Will be even more touching to watch this film now, knowing that we've lost Nora.

I can't believe it. I'm genuinely stunned. She was always the picture of health. A beautiful woman with a giant heart and a romantic soul that is so extremely rare, and completely irreplaceable.

And I'm glad that we have 'Julie & Julia', because it's a very sweet film, and absolutely devoid of cynicism. It has a big beating heart and makes you want to suddenly learn how to be a masterful cook. I don't think there is any other writer/director in the industry who could get me interested in cooking.

Norah's writing was magical. I have spent so much of my time reading her books, hunting down all her articles; anything I can get my hands on, because there's just something in the words, something in the rhythm, it was just a DELIGHT! It's like she painted all the words delicately with a paintbrush. But a magical paintbrush, that only she knew how to use. I can't explain. If you're a fan, you'll know what I mean.

'The screenplay is the big plain pizza, the one with tomatoes and cheese. And then the director comes in and says "you know, it's needs mushrooms." And you put mushrooms on it, and the costume designer throws peppers on. And pretty soon you have a pizza with everything. Sometimes it's the greatest pizza of your life and sometimes you think 'that was a mistake, we should have left it with only the mushrooms.'

Nora Ephron was the mushrooms. We lost a great one. We will miss you.
at 17:32
Share