Every Picture Tells A Story

When the rain came,
I thought you'd leave,
'Cause I knew how much you loved the sun,
But you chose to stay,
Stay and keep me warm --
Through the darkest nights I've ever known.
If the Mandolin Wind,
Couldn't change a thing,
Then I know I love ya.
-"Mandolin Wind"

Do we pick songs, or do they pick us? And how many songs out there are made for us but we never find them? Such an earth-shatteringly important question that I'm surprised anyone focuses on anything else. I'm exaggerating, slightly; but the fact remains that music is hugely important to nearly all of us.

This is a blog about Rod Stewart. More specifically, it's about his album 'Every Picture Tells A Story'. 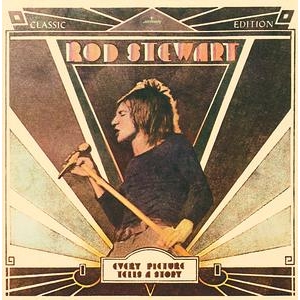 More precisely, it's about a few particular tracks on the album. I've written about 'Maggie May' before. Here's a snippet:


"I've been listening to this song since I was eight years old. Maybe it was before that. My parents had it on CD, and on Vinyl. On cassette too. It's the only song I never get tired of. Not even a little bit. I know every inch of the MTV unplugged version. I know all the moments when the crowd cheer or scream or breath.

But the magic doesn't end there. The album is full of it. If anyone can ever prove God exists, I think they'll prove it by a scientific experiment on one of the all time great albums. Because these things have a power over us like virtually nothing else. As I mentioned in my 'Maggie May' article, this song has had a hold on me since I was 8. EIGHT! That's insane. You listen to a song and think for a moment that it's just a song but then you realise over time that it plays a huge part in the narrative that is: you.

What was it about Rod Stewart in 1971? Why did he decide to record an album separate from his band, The Faces? And why is this his greatest work? Why did it not improve afterwards? How is it that someone can, so precisely and for no particular reason at all -- provide their defining moment suddenly in 1971?

And what's even more amazing is how some random film blogger over forty years later is still completely captivated by it. Is that because of the music, or because of me? What is it about certain albums that makes them sink into the deepest part of us and become part of our DNA?

I never cite it as my favourite album. I normally go for 'Born To Run' by The Boss, or 'August and Everything After' by Counting Crows, or 'Blue' by Joni Mitchell.

But there's something about 'Every Picture Tells a Story'.

I think 'Mandolin Wind' is one of the most romantic songs ever made. But I just read the lyrics, and to be honest I don't really know what it's about and it's probably not romantic at all, but it is to me. He really loves who he's singing about. And I love how he says 'ya' instead of 'you' --- every time I listen to it, it doesn't sound like it's coming from 1971, it feels like it's coming from this present moment that I'm in.

The title track, 'Every Picture Tells a Story' - incredible. A few years ago I was in rehearsals with some actors -- and the energy sucked! My directing wasn't working at all, they just couldn't GET IT and I couldn't explain it. So I said "Just listen," and then played this song.  (It's not on YouTube, so I've provided a Spotify link but it'll only work for members).

And then they tried again, and they NAILED IT! That was amazing to me -- I couldn't express how I wanted something I had written to be acted, I couldn't communicate it, but one of my favourite songs could.

I love the different levels to 'Every Picture...', how he brings it right down for the more vulnerable moments. Underneath the guitars and the drums is a hugely personal song -- I related to it somehow when I was 8, and I still do now.  How I related to it when I was 8, with lyrics like 'Shanghai Lil never used the pill' I don't know, but I did somehow.
I firmly believed that I
Didn't need anyone but me
I sincerely thought
I was so complete
Look how wrong you can be.
"Every Picture Tells A Story"

Those lyrics don't really do it justice unless you listen to the song. And you let it build to that point. Masterful.

I use these phrases like 'masterful' and 'great album' but to be honest I don't really know what I'm talking about. It's just about feeling, how these records sound to me. I'd love if everyone discovered or reconnected to the album the way I do, but it's not possible, because different things make us tick. But then again that's an amazing thing all in itself.

Let's talk about 'Reason To Believe'. I remember being extremely moved by this song even when I was a child. It's a song about being cheated on,  about finding a way to believe all the lies purely because of how much you love someone. WHY DID I RELATE TO THIS? I was 8! But the song resonated.

If I listened long enough to you,
I'd find a way to believe that it's all true,
Knowing,
That you lied,
Straight faced,
While I cried,
Still I look to find a reason to believe.
-"Reason To Believe"

Rod didn't write 'Reason to Believe', but you wouldn't think it after hearing his performance. So raw, real and immediate. The whole album is that way. There's nothing like it. Give it a listen and sink into 1971, sink into the present moment; and find out who you really are.
at 09:39
Share