A Pro Goes To The Track Alone

I'm reading 'Post Office', the Charles Bukowski novel. This bit really hit me. He's talking about trying to focus on the racing, when all the other men are focusing on the girl he's with.

"But fighting the wolves and the horses at the same time  was too much for me. I kept losing. A pro goes to the track alone. I knew that. But I thought maybe I was exceptional. I found out that I wasn't exceptional at all. I could lose my money as fast as anybody."
He's talking about the horses and gambling, but it resonated with me in a different way. I love that phrase. A pro goes to the track alone. What does he mean? In literature, we don't know what anyone means, we only know what we think it means (apologies if I just denounced English Literature studies in one sentence.) 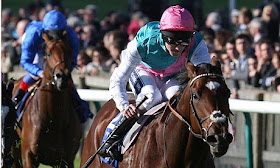 It got me thinking about what it takes to make it in the film industry. I remember a big day for me: the day I decided to go to the cinema on my own for the first time. I know people who would never do that, because they'd feel like a social outcast. But if you're gonna direct or write or act, you need to go to the cinema on your own every chance you get. Because that's YOU, up on the screen. That's what you're about, it's what you're after, it's where you're going. The more you're there, the more you understand it. The more you get closer to who you are, the more you become a kid in the front row.

Just to clarify, I'm not talking about doing everything yourself. Because you can't get anywhere without collaboration in this industry. I'm talking about an attitude. About getting up and saying "This is what I do! This is who I am!", and so often when you do that you have to stand alone, at least at first.

Ahhh but you know, as I write this blog I feel the meaning slipping away from me. A pro goes to the track alone. The sentence means something to me that I can't put into words. When I do, it gets diluted.

I think I'm talking about the focus that Ayrton Senna had to be a racing driver. Or the dedication that David Beckham had to stay after training when everyone else had gone home. There are certain things you have to do after everyone else has left the building. That's what defines you. When people leave the studio, you stay to work on the track for another hour. When everyone else is poking on Facebook, you're refining your script.

"The only thing that I see that is distinctly different about me is I'm not afraid to die on a treadmill. I will not be out-worked, period. You might have more talent than me, you might be smarter than me, you might be sexier than me. But if we get on the treadmill together, there's two things: You're getting off first, or I'm going to die. It's really that simple, right?"
-Will Smith
Come to think of it, the meaning of the line and where it has led me are completely different, but I'm happy with that. I'm more interested in the journey, in the associations rather than the actual definitions. That's why they told me I wouldn't be a writer in school, that's why I sucked when it came to my studies, because I didn't agree with the rules.

I was in a lecture once and they started analysing a Chaplin film, saying that the way he walked across the bridge and approached a girl was symbolic or a metaphor or some nonsense. I told the lecturer that he was full of shit and ruining what I loved about films. I never studied films again, at least not in an academic setting.

So I went to the track alone.

And I'm enjoying the journey.