Six years ago she was doing tiny mumblecore movies -- some of them were great, some of them sucked. But there she was, putting the work in, being part of one of the most interesting film movements of recent times. Some of them she co-wrote, one of them she even directed ('Nights and Weekends'). For those who aren't familiar with the term 'mumblecore' - they're essentially films that are shot with no money, in a very naturalistic way, that focus on character rather than explosions.

She was a revelation, because she was just so natural and real. Along with people like Mark Duplass and Kate Dollenmayer, they became some of my favourite actors. 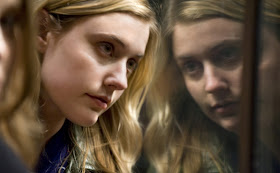 It's important to look at their careers, because they did it in their OWN way. The mumblecore movies (as much as those involved dislike the term) answered to no-one, they followed their instincts and sensibilities. When you see 'Nights and Weekends' or 'The Puffy Chair', whatever you think of them, you can't knock their integrity.

That's why I'm so excited to see the trailer for 'Lola Versus'. Here is a studio-produced (partly) movie that has Gerwig as the lead. She's gone from these tiny personal movies to a Fox Searchlight produced flick, yet still retains that personal touch. The thing about Gerwig is that you believe her, she's one of us. That's not a feeling you get when you watch Mila Kunis or Megan Fox.


Greta got there on talent, hard work, and originality. And by originality I don't mean that she reinvented the wheel -- I just mean that she remained herself. The same thing goes for the Duplass brothers. The studio did their best to interfere with 'Cyrus', but eventually they clawed it back and made the personal movie they wanted to make. I just saw the trailer for 'Safety Not Guaranteed'. It's crazy. I'm in love with it! Not only is Mark Duplass in it, but him and his brother were producers on it.


There's a new way of making films, and we're all included. It's about independence and art. You don't need the studios. Yet if you do something GREAT, the studios will want in.

Kate Dollenmayer's performance in Andrew Bujalski's 'Funny Ha Ha' blew me away. But get this, she never acted again! That seemed crazy to me. And then you see that in 2009 she was involved in another Bujalski film, but as 'assistant camera'! Don't you just love that? There are no rules anymore, it's about collaboration. The important thing to take from mumblecore is that they are incredibly personal movies. Now those responsible for the movement are quietly moving up in the world by making films that are involved with (at least partially), the studios, yet they've remained themselves.

Greta Gerwig has something that most Hollywood actresses don't have. Her IMDB board is a bit shocking, because there are people attacking her looks and slamming her in a variety of ways. But they miss the point, she's ONE OF US! She's real. Have you seen 'Greenberg'? She'll blow you away in that. She feels like your ex-girlfriend, or your best friend from high school - she's real. Even in 'No Strings Attached' -- she's a breath of fresh air. That's why it's a new type of acting career. She gets cast in the average studio fare like 'No Strings Attached', and she gets the lead in an Indiewood feature like 'Lola Versus', AND she's in the new Woody Allen film! And it's all on her terms. I don't know what you think of her. You might be inspired by this post to check out her work then you'll find her boring and lacking charisma, she's had that criticism before. But that's kind of my point, it's personal, she's personal. She's the friend that some people enjoy being around, some people fall in love with, and some people dislike. But that's infinitely more interesting than what we usually get. It's something real.

She's playing by her own rules. How many people in the industry can you say that about?
at 03:20
Share