THE CABIN IN THE WOODS

I would have seen it anyway, because Bradley Whitford is in it, and I think he's amazing. But I guess the main reason I saw it is that I bought into the hype, and the reviews have been so positive. But y'know, I didn't really love if much, if at all. 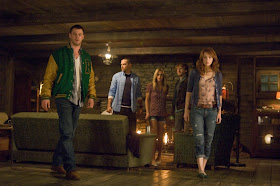 It was clever; I'll give it that. An intriguing and amusing concept. It felt like an intellectual achievement to me, I could appreciate the story, the twists and the uniqueness of it, but it didn't sustain my interest.

I can't be too critical, because the film is probably great, like people are saying, it just wasn't for me. I'm not the right audience. Don't you hate that? When you realise everyone is having a good time, but you're praying that there are only 7 minutes left when there's still 50 to go.

It's been a long time since I've been this underwhelmed by anything with either Bradley Whitford or Richard Jenkins. 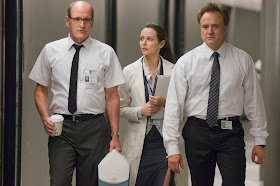 So what's my problem? Why wasn't I engaged? Maybe it's the fact they were parodying genre conventions. I'm not a genre person at the best of times. As soon as something is cornered into a specific genre, I start to yawn. The film didn't have any truth to it, it didn't have anything you could latch onto and care about. I need that. I always need that. Even if it's just one monster with a bit of humanity, or one main character who remotely resembles someone you know in even the tiniest way.

I need to feel connected.

With 'The Cabin In The Woods' we have the genre stuff, and the clever ideas, but why do we care? This has always been a problem for me. I have friends who LOVE bad horror movies. I mean the really bad ones. The ones with titles like 'Attack of the Killer Clones of Cairo 2: The Pharoahs Steal The Banana People'. They love it, but I have no interest at all! I don't find concept, or parody, or silliness particularly exciting. It needs a beating heart behind it.

I'm not averse to weird shit. 'Bubba Ho-Tep' is one of my favourite movies, and that's a flick about Elvis Presley and a black-JFK battling an ancient Egyptian mummy. 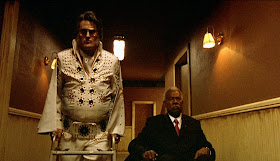 'The Cabin In The Woods' didn't, at any point, GRAB me. I always felt a distance.

I'm mostly sitting on the fence here and saying 'hey, I'm sure it's good but it's just not for me'. But actually, when I really think about it; I think I'm gonna say that no, I don't think it's a very good film. I think most of the good press has just been hype. This isn't a film that will last.
at 14:50
Share