Land Of Hope and Dreams

I want to sleep beneath peaceful skies
In my lover's bed
With a wide open country in my eyes
And these romantic dreams in my head
In case you had any doubt, let me tell you: I love Bruce Springsteen.

Every single thing I've been through, for better or worse, I can tell you the Bruce Springsteen song that carried me through it. He was there when I was on road trips, he was there when people I love passed away, he's here right now, he's here all the time. Without the sound of The Boss, my life means next to nothing. His music, his words, his voice; the meaning permeates through everything he does and in turn, informs everything I do. This might sound insane or obsessive but hey--- I talk the same way about Chaplin and Wilder, this is why I do what I do. This is why I've blogged manically for three years, it's why I write, direct, and breath. If you're not gonna love something to the very limit of how much it can be loved, then what's the friggin' point? That's why people who don't commit to relationships suck, because they're not willing to go on the full journey and see where they land. 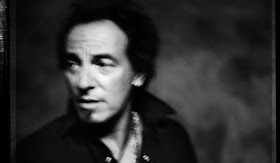 Springsteen's new album has just been released - and of course, I'm loving it. And yes, I'm biased. Bruce is like God if you're religious, or the love of your life if you can't get over her, he's everything and everywhere. It's good just to hear him again, to see him continuing the dialogue he's been having with his fans for over 40 years.
But Clarence Clemons died.
If you know anything about Bruce Springsteen you know exactly what that means. That's why we love Bruce, because he's a true artist. He didn't just release a bunch of songs and get famous. Instead, he stuck around for the long haul. He sang our lives, our sorrows, our dreams ("Born To Run," "The River"), and he guided us through September 11th ("The Rising",) and the Iraq War ("Devils & Dust"). He doesn't leave us alone. He didn't take the money from "Born In The USA" and become a celebrity, instead he kept focus and remained an ARTIST.
There's a Springsteen song I have always LOVED called "Land of Hope and Dreams". It was debuted during the reunion tour in 1999. Later on he'd do heartbreaking solo acoustic versions during the "Devils and Dust" tour. But he never cut an album version.
Until now.
The new album version is a celebration. I don't know how to describe it. It's part gospel, part rock 'n roll, part something else I can't even describe. Like so much of Springsteen's work, it feels like an ongoing part of the journey. I quoted the song in a 2009 article I wrote called "It's Now Or Never". Little did I know that three years later, Clarence would be dead and there'd finally be an album version.
Here's where your heart breaks.
When you hear the saxophone. Clarence is on the record. 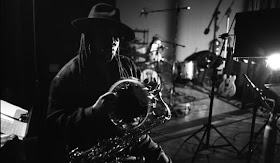 He passed away, we thought it was over, but here he is. We hear him. And wow. It's unmistakable. The thing about Clarence Clemons on sax is that it's a distinct VOICE. You hear HIM. Who he was, who he IS, and what he means to us. The legacy he left behind lives on. Literally, LIVES ON. You listen to this track and when you hear the saxophone your spirit soars and your mind flies and you hear that same sound that has been carrying you excitedly and determinedly through life this whole entire time.
That's what it is to be a Bruce Springsteen fan. That's why we crave it. That's why we pack out the stadiums.
The great thing about "Land of Hopes and Dreams" is how it includes EVERYBODY.
This train
Carries saints and sinners
This train
Carries losers and winners
This Train
Carries whores and gamblers
This Train
Carries lost souls
This Train
Dreams will not be thwarted
This Train
Faith will be rewarded
This Train
Hear the steel wheels singin'
This Train
Bells of freedom ringin'
This Train
Carries broken-hearted
This Train
Thieves and sweet souls departed
This Train
Carries fools and kings
This Train
All aboard
The new version has a beautiful refrain of "People Get Ready" at the end. A perfect ending. That's the sad thing about the artists, things end. The band as we knew it, is forever changed; Clarence is gone. But do things ever really end? Bruce Springsteen has kept the story going.
at 11:14
Share