BRUCE SPRINGSTEEN @ SXSW - The Keynote Address will BLOW YOUR MIND

I'm blown away by this. How often do we get this much access to the greatest artists? Hardly ever. And wow, he's so human.
When I speak passionately about Springsteen, people often disregard it; they don't like his music. Fine, maybe his music isn't for you--- in fact, he talks about that exact thing. Shit, he talks about EVERYTHING in this address. Anything that you've ever thought or felt as a creative person, Bruce has it covered in this speech.
It's 52 minutes. That's long, I know. And after six or seven minutes you'll have stamina issues, you'll wonder if you can make it. But just do this one thing for me, please, watch it.
You think these big rock stars are just guys who got lucky, who had a hit record once. But LISTEN TO HIM, he knows EVERYTHING, about EVERY genre of music. He digs it. He loves it. The passion drives him. There's no way this guy could have NOT succeeded. There's no-one like this. 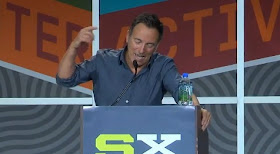 I wish I had what he has. Truth is, sometimes films just piss me off and I wanna run away and give it all up. But then, how can any of us compare ourselves to someone like The Boss?
His level of expertise, care and humanity is just mind-blowing. I've never seen anything like this speech. He knows music, the history of it, the evolution. This is what it takes if you really wanna make it.
I think what he speaks about here has relevance for everyone who calls themselves an artist.
"By the time I reached my twenties, I'd spent a thousand nights employing their lessons in local clubs and bars, honing my own skills."
-Bruce Springsteen
He ain't exaggerating. A thousand nights, that's what it takes. That's not rehearsals and practising at home. That's a thousand nights in front of an audience. The Beatles and Stones did that too. What's the equivalent for you with your art?
You can say you don't like Springsteen's music, but you can't deny his achievements and WHY they happened. The path to being an artist has rarely been explained with as much clarity as in this video. Watch it. Trust me, you'll be better for it.


"Rumble young musicians rumble.
Open your ears and open your hearts.
Don't take yourself too seriously.
And take yourself as seriously as death itself.
Don't worry.
Worry your ass off.
Have iron-clad confidence.
But doubt, it keeps you awake and alert.
Believe you are the baddest ass in town.
And....
YOU SUCK!
It keeps you honest, it keeps you honest.
Be able to keep two completely contradictory ideas alive and well inside of your heart and head at all times.
If it doesn't drive you crazy,
It will make you strong.
And stay hard.
Stay hungry.
And stay alive.
And when you walk on stage tonight.
To bring the noise.
Treat it like it's all we have.
And then remember,
It's only rock 'n roll.
I think I may go out and catch a little black death metal, thank you."
-Bruce Springsteen
at 14:15
Share