Friends In The Front Row

Anthony Abatte has been following my blog for about a year now (at a guess). He's that friend who just 'gets it', you know what I mean? Everyone has friends they write for -- and he has become one of them. We're just on the same wavelength somehow. As is often the case, he lets me know often that he likes my work, but how often do I say thanks, or say I like his stuff? Not nearly enough.

Tay and Val have sent me some of the nicest emails I've ever received -- they make you feel like you can not only inspire a few readers, but maybe inspire the world. And I guess, there's some truth in that -- for people to inspire the masses, you first need a few people who believe in you. And the weirdest thing is how --and I hope they don't mind me saying this-- I felt like, when they first contacted me, they saw me as someone to look up to in terms of creativity. But the funny thing is, I feel the same about them. They're out there, doing their fantastic projects -- and it's inspiring. Artists are on an even playing field; and it's great to know that I'm out there doing my thing and they're out there doing theirs. That support is what keeps people going. 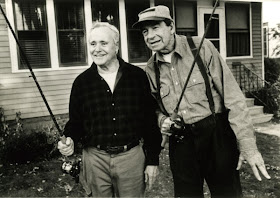 Teri is kind and supportive in an unbelievable way. She comments here on the blog, she 'likes' my Facebook updates and she retweets my articles. And she forgives me after I've been grumpy or ranting about something. It always gets me, how people can be so kind and supportive -- what makes a person do that? I have no idea. Sometimes you just have to be happy that people exist. The thing about Teri is that she's so creative and alive and full of ideas; which is what makes her blog so interesting.

Semi is the coolest. She has a way of popping up with a comment or email that makes my day. And she blogs too. I don't know Semi that well; I just know that she's young and intelligent and can potentially achieve anything and everything. In fact, anything less than achieving EVERYTHING and I will be disappointed.

Happy Frog and I quietly gets on with her writing; occasionally popping up to tweet me, or comment here, or send me an email. It's exciting knowing Happy Frog and seeing her work blossom -- because I really feel the sense of a writer gaining momentum and confidence each time I read something new. That's another great thing about being part of this community of bloggers -- we get to witness something. The good writing, the bad writing, the indifferent middle ground. We see it all. That would be hell, except that everyone cares about each other which somehow makes it all WORTH IT.
at 14:08
Share