Gender and The Rom-Com

Men aren't allowed to like rom-coms. This is the rule. If the girlfriend wants to watch a rom-com then the man can watch it but he has to say "she made me watch it". If the man doesn't have a girlfriend then he needs to say "I watched it so that if I ever get a girlfriend I'll have something to talk about". Men have to watch action films and sports films and films about sport with action in them. Transgendered people have to watch documentaries only.

Men get uncomfortable talking about rom-coms. It's like talking about your bowel movements or talking about how often you cut your toenails, it's just not something you ever do. It is customary, when asked about a rom-com, to say "I don't really watch them, to be honest". 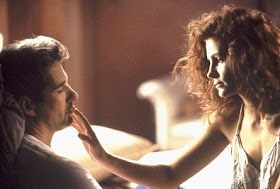 If a man does watch a rom-com it is to be assumed that he is a woman, or gay, or that he accidentally sat on the remote control during 'Die Hard'.

Romantic Comedies are not allowed to be in your top 5 movies lists, otherwise you will be outcast by all the other people within your gender. Top 5 lists are allowed to have awkward cult films, and they can have 'I-know-it's-lame-but-I-love-it' films, just as long as they're not romantic. If, when asked about your favorite films, you say you love 'One Fine Day' or 'Ghost' or 'Pretty Woman', you immediately need to take back what you said and replace it with 'Pulp Fiction' or 'Donnie Darko'. Everyone is allowed to say they like 'Donnie Darko', because nobody knows what it's about, which therefore means it's genius and acceptable to the male gender.

If, despite your best efforts, you still watch and enjoy a rom-com. You can get away with it by saying "It wasn't that bad actually". This implies that it was not terrible, but that you did not want to watch it.

Every film ever made has a value in terms of social approval and significance. You must make sure you choose from the appropriate list, otherwise you run the risk of being a free-thinker and individual. If you happen to truly love a rom-com, then you will be told that you're a sheep and that you like dumb rom-coms like everyone else, even though nobody else loves them or is at least not allowed to say they love them because if they do they will be outcast.

If you want to be a man then you must not feel free enough within your gender to watch films that include romance. You must stick within a small perimeter which has in it only action films, sex-comedies and more action films. If you admit to liking romantic films, then you will be excluded from the gender immediately.
at 21:00
Share