The difference between a celebrity and an artist isn't always apparent straight away. Britney Spears and Adele might look like they're playing the same game, but twenty years from now we'll see the difference more clearly.

'Pearl Jam Twenty' is for Pearl Jam what 'The Promise' was for Springsteen, and what 'Senna' was for Ayrton Senna. The story of the artist is one of a long and intense struggle to keep a hold of your art in the midst of a world that pushes you to be something you're not.

At the beginning of the documentary you could be forgiven for thinking this is going to be a boring year by year biography of the band --- but of course, it becomes something more. The material was all there, of course, because of the band's distinguished career, but it's the fascinating insight and care of the director Cameron Crowe that helps shape it into something moving and essential for the audience.

Artists are often concerned by feelings of worthlessness. Why are we doing this? Why are we making meaningless movies? Why are we chasing high box office receipts? Here's the thing; the true artists aren't chasing box office receipts, that's not why they're in the game. Springsteen fought the record label and refused to put out any material for four years after his hit album 'Born To Run'. Chaplin fought the studios so much for control of his movies that in the end he built his own one. Pearl Jam fought with Ticketmaster when every other act in music turned a blind eye.

Pearl Jam are not just a band, it's not just music. True artists transcend. That's why I mentioned Ayrton Senna. When he was racing, it wasn't just a motorsport. I watched the Grand Prix today and couldn't stop myself from snoring, but back when Senna was racing, we were watching a gift from God. We were watching beauty and tragedy and magic and soul. It's the same with Pearl Jam. I'm not even saying I'm the biggest fan; but what I am saying is that when you look at their work over twenty years, it becomes about more than music. They stand for something. 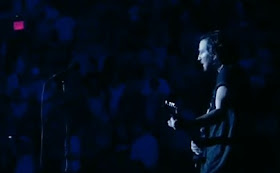 The film is poignantly signposted by key incidents. The first of which is the death of the lead singer of MotherLove Bone, Andy Wood; who died before Pearl Jam existed and even before Eddie Vedder was in Seattle. He was a key part of the scene, and the band had Stone Gossard and Jeff Ament in it, who went on to form Pearl Jam with Eddie. The ghost of Andy lingers throughout the film, and it seems, throughout the history of the band -- he is hugely there in spirit throughout the journey of Pearl Jam. And this is what I'm talking about -- integrity. The band have always held onto themselves and where they're from. It sets them apart. How often do we see our favorite bands turn into something we hardly recognize? Too often, unfortunately.

We also get to see up close just how affected the band were by the death of Kurt Cobain. It's touching how they feel about him. They seem aware that, without Kurt, they probably wouldn't be where they are now. I would say more about it but I want you to watch the film.

This is a band who keep their Grammy Awards in their dusty basements because they don't care that much about them. They care about the fans. They care about playing a completely different setlist every night even though it's a logistical nightmare. They care about fighting the monopoly Ticketmaster have over ticket prices, they care about being truthful about their views on George Bush, or abortion, or human rights abuses, even though it risks alienating half of America. They're a band whose only goal is to be themselves and to do it as truthfully as possible.

At the Roskilde Festival in June, 2000, nine people in the crowd were crushed and suffocated to death during the band's set. Much like the death of Andy Wood which informed the first ten years of the band's history, the Roskilde tragedy has influenced everything that has come since. It's well documented that the band almost broke up and retired because of the affect it had on them, but what the documentary shows so beautifully is how it made the band closer, and deeper. If there was ever any hint that the band were in it for the money or fame, then it was truly extinguished after that fateful night in 2000. People change in profound ways. It's like how Ayrton Senna changed after his third championship title, or after Roland Ratzenburger's death the night before his own. When you do a thing for long enough, when it's your life's passion, it eventually gets influenced by all the profound things you face. It's unavoidable. Only years later when you look at it objectively, as Cameron Crowe does here, canyou see the beautiful and essential pattern that forms before you.

'Pearl Jam Twenty' is a film about what it takes to make art and keep making art. And it's made by the guy who made 'Almost Famous', so it's essential you watch it immediately.
at 15:03
Share