Craig can't stop himself. Every time, without fail. He orders the biggest popcorn and the giant ass coke, and THEN he bitches about the price.

We end up in this bizarre argument at the counter. Craig moans about how disgraceful it is that a medium popcorn is the same price as his mortgage, and the cinema worker, who is usually a seventeen year old girl who looks like she wants to kill herself, gets all defensive and smart ass. And then there's me, saying to Craig that he doesn't get to moan if he's handing the cash over.

I mean, popcorn is an option. If you don't want it, don't buy it.

Sometimes I think he starts the argument just because he thinks the girl is cute. I don't think he realises how psychotic he looks when he starts yelling about trading standards and capitalism and whatever it is he yammers on about.

We were in our seats. They never make those cup holders the right size. Mine was pretty much falling through a hole. Weird things happen in the cinema. Ever look down at your shirt halfway through a movie and see two bits of popcorn stuck there? Even happens when you're not eating popcorn.

Then the other thing happened. I was annoyed but Pete was laughing, except for when I was laughing and Pete was annoyed. You see, in the seats directly behind us, we had a crazy guy who puzzled over plot issues out loud, in a confused manner. Hard to explain what he was doing, but he was kind of insane. And he kept repeating dialogue to the friend next to him.

He got louder and weirder. Pete turned back to give him the evil-eye. He turned back and whispered to me, "I think he's on his own." This made me instantly crack up. I was in a sea of laughter. Actually, a sea of popcorn. It was stuck to me. Don't know how. No-one knows how that happens.

But I was laughing uncontrollably. Because this guy who'd been yammering away like a mad-o was talking to himself.

What do you do? Do you ask him to be quiet? He's not even talking to anyone! He may not even be in the cinema, mentally. He may think he's on a steamboat or something.

I needed to pee real bad. I tried to figure out the running time in my head. How long could be left? First of all you get an instinctive feeling about how long is left. Normally this feels good, because you think you only have to sit through ten more minutes.

But then you do the plot check in your head. You think to yourself, "Diaz still needs to convince some people, she needs to learn a valuable life lesson, and win the guy. And Lucy Punch's story needs to be resolved." So you figure out you have 27 minutes remaining.

And it drags on. When you need to pee, the story gets resolved but the film doesn't end. The director likes to fuck with you, just because he knows you want to pee. I hate that. "The Directors No-Pee Cut". I'm sure you've experienced this.

BAD TEACHER REVIEW: Kinda lame. Some things didn't make sense. But there are some laughs. Cameron Diaz is gorgeous. She should date film bloggers. Timberlake keeps impressing as an actor. Overall: 5/10 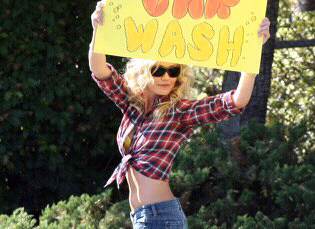