I loved it. Had a great time.

It all began yesterday. A meeting was cancelled and I found myself in town with some time to spare. I went to see "Limitless". There was a trailer for "Scre4m". I loved the trailer. Felt a strong sense of affection for the characters. Or maybe it's nostalgia.

I am often found preaching against sequels -- but what can I say? I saw the trailer and then I wanted to see it. I felt an emotional attachment. Is that such a bad thing? Sure it may be a cash in, but I want to see the Ghostbusters again. I want to see Woody and Buzz argue. We fall in love with characters and they inform our childhoods, our teenage years, and we always long for them. "They don't make them like they used to," we say. We think we miss the stories but most of the time we miss the people.

I didn't think I was a big "Scream" fan and I don't even remember the sequels. But I was so on board with this film.

And Emma Roberts is gorgeous. And Hayden Pannethingy is too.

And suddenly I'm like everyone else. Excited about a sequel and staring at gorgeous women getting stabbed in close-up. This is so not me.

But it is me, because it's the movies, and I experienced real community. The packed out cinema was in giant fits of laughter, and there were HUGE screams. It was almost enough to stop people lighting up their Blackberries. We all laughed together when a woman screamed way too loudly, and we all shouted at the characters, trying to save them. And we knew exactly what was coming yet we kept getting surprised.

And this was funnier than any comedy I've seen in years. It's strange how attached you get to Sidney and Dewey and co. You don't get that from one movie. You get that from three movies and a ten year hiatus.

I had a blast. The cinema can be such an amazing thing. I hate people using their phones in the cinema but at the climax of the film they forgot about their mobile devices because they were gripped by the plot devices. People shouted and talked throughout the movie, but I liked it. People needed to talk. And at the end, everyone applauded. I was surprised, but it was earned. We all had so much fun together.

The opening night audiences are the fans. They're in the club. The cynics come a week later. That's usually me.

I learned something tonight. Don't judge a film too quickly. And don't be pretentious, don't think you're smarter than anyone, or that "people like crap films these days". It might make you feel clever, but while you're feeling clever and righteous, everyone is at the movies having the time of their lives. 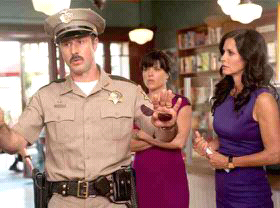