I was clearing out my inbox yesterday. I saw a lot of old emails from actors who'd applied to be in my films in years gone by. I emailed some of them, just out of curiosity. What are you doing now? How are things going? Can I see your work? A lot of the email addresses didn't work. But of those that did, most of the actors aren't acting anymore. And this was only from two years ago.

Come to think of it; most of the actors who started out when I started out are now at home full time with their kids, or have settled into a banking job.
How much do you want it? This business is mostly just about sticking around long enough for people to take you seriously. At some point; everyone says they want to write, or act. And most of them give it a go. But 'give it a go' means nothing. If there's one thing I talk about here on Kid In The Front Row it's that this shit takes a long long time. 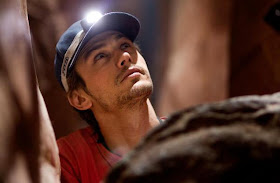 But not as long as you think. Maybe the difference starts to show after two years.
I am ALWAYS reading a book that's either about this industry, or I'm reading something that'll inspire me. Right now I'm reading Roald Dahl's "Going Solo" - for fun? Partly. But mostly because: he means a lot to me. I am trying to rediscover what I love about him, and what made him special. I'd say about 40% of what 'Kid In The Front Row' is and means, comes from my love for Roald Dahl.
And after that I'm re-reading Eric Lax's Woody Allen biography.
And tomorrow I've got to wait in all day for a package, so I'm working on a new spec screenplay.
And I'm loading my phone up with film podcasts.
And I am always reading quotes by people I admire, and I am always watching films, and I am always shooting something.
How many people do that? Are you doing it enough?
My strength as a blogger, is that I inspire people for about thirty seconds. They read my manifesto and they feel all jolly, but it lasts for thirty seconds. But we've gotta make it last longer. It has to last for years. You need to be dedicated beyond belief to make it in this industry.
You're going to have the financing pulled out of your movie a day before shooting, you're going to sign your screenplay over to idiotic producers, you're going to get cast in a  film that is so bad that you literally want to vomit as soon as they yell 'action!'. And you're going to have no money and no money and no money.
And then you decide whether to show up tomorrow and start a new script, apply for a new audition, or direct that new project. Or you're going to get a job in an office and hang out with your high school buddies. And that's fine and that's sensible and sometimes, you don't even have a choice.
But the dedication is everything. And if you hold on, and keep going, and keep working, and keep meeting people, and keep encouraging people, and keep trying, and keep creating, and keep smiling. Who knows where this journey ends up.

After all, what else are we supposed to do?