The Kid In The Front Row Manifesto

You don't even know what you're going to create yet, you have no idea what you're capable of. Your first screenplay or your fifth might be great, but what about your nineteenth? We have no idea. When Woody Allen was writing stand up routines for comics, he didn't know he'd write 'Hannah And Her Sisters' or 'Crimes and Misdemeanours.' That was twenty five years later.
You don't even know who you'll meet this weekend. You don't know what problems you'll overcome in the next ten years. You don't know what your favourite film of the next five years will be. Who knows what will inspire us? Who knows who our future muses will be? We often worry about not getting the gig or not being good enough-- but we're worrying about projects and jobs that don't even exist yet.
The world is changing and the world is getting smaller. There are thousands of people out there who love the things you love. And there are writers and actors and directors and camera operators and make up artists scattered all around the world who you don't know yet. But you will. Who knows what the future will bring.
There are no rules. We live in the generation that invented Facebook, that developed YouTube, that made the studio execs a little less sure how big their pools are going to be in the coming years.
This is our time to get good. And if we suck, let's work at getting better. You used to need money and contacts to make a film. Now you need a video phone and a YouTube account.
We are the generation of Zuckerberg. Of Banksy. Of communicating in 140 characters. Anything is possible. Art has been getting its ass kicked for a long time. But things are different now. We can have voices again. It takes effort and its a choice we have to make. We need to decide on what we value.
On the one hand we have movie franchises where they remake Spiderman every four years because they know we're dumb enough to buy a ticket, we have short films made to promote chocolate bars, we have countless movies of girls running around in bikinis saying dumb bullshit in horror films that can only be called original because they have a different title to the ones that came before. We have the same thing we see every year because we've become numb to the notion of actually being challenged.
On the other hand, we have art. Personal expression. Standing up for what we believe, what we love. Nobody wanted to let Chaplin direct, nobody was comfortable with George Carlin's comedy, nobody loved that band you love when they started out; it was just their girlfriends and parents.
Art takes longer. And it's harder. And someone is more likely to fund a project about a cheerleader who went to blow-job school than your passion piece about an Israeli sandwich delivery driver who takes a road trip to Sweden to find his son. But if you follow through with it against all the odds, you get to be Bob Dylan, you get to be Godard. But more than all that you get to be yourself. You get to be a kid in the huge playground that is the unstoppable and ever surprising oasis of magic that is the human imagination.
Be art. Be yourself. Be a film that means more than the sum total of its opening weekend figures. Be Charlie Chaplin, be David Foster Wallace, be Joni Mitchell. If we don't do this, who will? 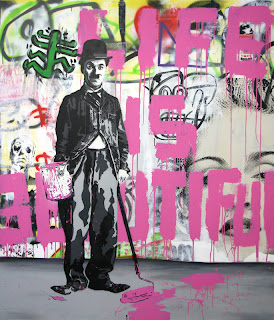 I meet, tweet, email and speak to SO MANY hugely talented writers, directors and actors every single day. But most of the time they're struggling, or pissed off, or going through a rut. It's because we're in an industry that doesn't care about us because the industry is about money, about making rich people richer. Good films don't cost $120million to make, and cinema tickets shouldn't be double or treble the minimum wage, and you shouldn't have to sell yourself out day after day in the hope that by the time you're 80 you'll get to do the projects you're really passionate about.
Lets take our ideas, our talents and our energy and let's find ways to work together, to create the projects that really matter. Its time.
at 03:04
Share