The Film I Always Go Back To: You've Got Mail

Today I'm running a blogathon called "The Film I Always Go Back To", - where bloggers write about the film they always find themselves re-visiting after stressful weeks, or messy break-ups, or maybe just because they love it so much. I will be sharing other blogs on this theme over the weekend through the Facebook Fan Page.
I love "You've Got Mail", I've seen it countless times. I've never really blogged about it, apart from the time I compared it to 'Sleepless In Seattle', but as I started to think about this blogathon I set up on the theme of 'The Film I Always Come Back To', it seemed to be the only choice that fit. 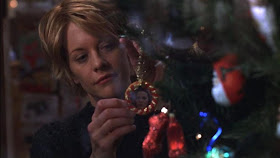 I think Nora Ephon is a wonderful director. There's no-one better at creating a warm and welcoming environment for two hours. I don't think any other director could make me enjoy a film about women cooking for two hours, but that's exactly what she did with 'Julie & Julia'.
'You've Got Mail' is about love in the modern age. It was made before Facebook and Twitter, but it's still in the same world. A world where we tweet and update statuses incessantly, and we like to believe it means something, or someone's listening. 'You've Got Mail' is the fantasy; that words over a computer can mean something. They can make people fall in love.
'You've Got Mail' paints a beautiful New York City; autumn leaves and beautiful cafes on the Upper West Side. It's a New York I believe in. It'd be 'cooler' for me to see NYC the way Scorcese does, or even Woody Allen; but the New York I love is the Nora Ephron version.
And I never thought about it until writing this article; but YGM is essentially about a corporate company fighting with an independent local store, which is basically what I blog about every day, maintaining a bit of 'The Shop Around The Corner' in a world dominated by the 'FOX Books' equivalent.
I like that films can be fun and have a sense of joy and romance. This film nails it. Too often films get self-conscious about being romantic, or they make the joy too big, like some daft Will Ferrell flick. 'You've Got Mail' just tells a good story, with engaging characters and memorable dialogue. The conflict between Kathleen Kelly and Joe Fox is played perfectly by Hanks and Meg Ryan; two actors who have done their best since this film to steer clear of their natural talent for romantic comedies. Tom Hanks is masterful in this. He gets the recognition (deservedly) for films like 'Forrest Gump' and 'Saving Private Ryan', but here he has an ease and playfulness that is a pure delight to watch. Nobody can do this the way Hanks does. I just hope he does more of it-- because the smug-I'm-a-good-actor version of Hanks we've got since Da Vinci has been extremely disappointing. 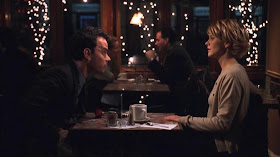 I like rom-coms. And it's great when they're done right. Truth is, the indie films generally do it better (Before Sunrise, In Search Of A Midnight Kiss) but I think when it comes to big budget fare, Nora Ephron is the best there is. There's a lightness and sweetness to her work which we rarely see in film, or the world. And lightness ain't always so bad.

'You've Got Mail' is a delightful, humorous breeze; one of my favourite movies-- every time I watch it I sink into its version of New York. I love it.

If you write a blog and like the idea of this blogathon, please get involved! Write your version of "The Film I Always Go Back To" this weekend! Meanwhile, I also recommend watching "The Shop Around The Corner", the fantastic Ernst Lubitsch film that "You've Got Mail" was based on.
at 00:01
Share