I was in the bakery near where I live today, buying some lunch - and got talking to the lady about film. I was asking if they'd consider catering for my next movie, because even when you're buying bread, you never stop thinking with your film hat on. So of course, I explained who I am and what I do - and she told me about her thirteen year old boy, and how he's been auditioning for acting jobs, and creating music; and doing all sorts of wonderful things.
And within two minutes and the buttering of a baguette -- she told me about how one minute she was young and wanted to see the world and the next minute she was working in a bakery for twenty years. And the boy is only thirteen but you can see she's hoping he's her ticket to see the world. She told me, quite touchingly, how more than anything she wants to make some money so she can take him to America. Because for her, that's where people like him will succeed.
But right now he's thirteen and he's got to figure out what he wants to do, without a heap of pressure on his shoulders. She said his music and acting could be terrible, what does she know, she's just his Mother. I said that his stuff probably is terrible but it's not what matters. Right now, he's thirteen. At sixteen he'll be better. I told her the thing I always tell Mother's of young talented people; I tell them how long it takes. I explain that "The X Factor" and "American Idol" are bullshit. They make it look like fame and success come after two minutes of talent and an audition. But that's not talent, that's a TV show and a bit of marketing. Real talent is spending your last penny on some bread and crying your eyes out because the nineteenth person in a row rejected you.
"The girl doesn't, it seems to me, have a special perception or feeling which would lift that book above the 'curiosity' level." -Rejection Slip for 'The Diary Of Anne Frank'
Talent takes a long time. Nobody cared about John Wayne's early films. Nobody turned up to Steve Martin's stand-up gigs for eight years.
But you're not thirteen anymore. You're twenty two or twenty nine or fifty six and nobody is watching or reading or buying your stuff. Or six people are when you need fifty thousand to break even. It's stressful, right? And one side of your brain is telling you to give up and the other side is telling you to get an office job for two months even though you know you will probably kill all the staff there. Everyone is trying to work it out. And right now your best friend has a role on Broadway, and you're struggling. But next year you sell a screenplay and get interviewed on TV, and that friend who was on Broadway is back on Broadway but he's selling tickets at the discount booth. 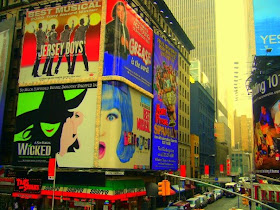 Your talent, your ideas, your voice; they're in constant development. Take my blog for example --- sometimes I nail it, sometimes I send you to sleep. Sometimes you're inspired, sometimes you wish I'd shut up. But hopefully, I get better at it. And it keeps growing. One minute you have one follower, the next you have two hundred, and it keeps going. You start out with no followers partly because you've not written anything yet, and partly because you're not the best you'll be yet. It's a lifetime commitment. We're not getting rich, but that was never the dream. The dream was to be artists. And that shitty feeling you get when you fuck up an audition or when a producer laughs you out of the room or you post your new film on Youtube and only get 9 views--------- that's the journey. You get stronger each time you fail.
But the thirteen year old just plays and experiments; and we need to hold on to that essence. We need to be kids in the front row.
Won't you let me walk you home from school?
Won't you let me meet you at the pool?
Maybe Friday I can
Get tickets for the dance
And I'll take you.
-Big Star - Thirteen
at 11:45
Share