The Apartment - It's A Must, Gracious Living-wise

For one week I will be focusing on the film "The Apartment." This is the first in a series of articles.
I was responding to an email interview yesterday, about one of my own films, and one of the questions was, "what does this film mean to you?" I didn't have a clue. It's the same with the films that mean the most to me - I am terrible at describing it. It may be that I am too close to them, but I am beginning to suspect that it's something to do with the types of films I love. When you love 'The Apartment,' you might recall a particular scene, or great line, or a moment between C. C. Baxter and Fran Kubelik. But the reason you love 'The Apartment' isn't any of those things, at least it isn't for me -- it's something intangible - a magic that permeates through it. You feel it when you read the script, you see it in Jack Lemmon's face and you feel it in them musical score. Some films rise far above just picture and sound, and this Billy Wilder film is one of them.

"It's hard enough to write a good drama, it's much harder to write a good comedy, and it's hardest of all to write a drama with comedy. Which is what life is."
-Jack Lemmon
That quote is true. Comedy is tough to write, but some people can do it. Even fewer can make it work on screen. When you well and truly laugh at a movie, it's a rare thing. When you think about it, very few comedies stick out for people. For people of my generation, they'll mention a film like "See No Evil, Hear No Evil" or "Cool Runnings." They are very funny films. But why, what was it about them films? It's hard to say.
Even rarer than those, are films that mean something beyond the laughs --- that resonate with who you are, how you're feeling, and how you see the world. That is where 'The Apartment' excels -- it mixes the painful with the joyful, in a way that only a few --namely Billy Wilder, Charlie Chaplin and Frank Capra-- were able to do. Even writer/directors like Woody Allen try, but rarely quite make it, because it's just too hard to get the potion right.
I was watching 'The Apartment' last night, and it was remarkable to me how Miss Kubelik is in love with Mr. Sheldrake (the other man), right up until the very end of the picture. There's a real sadness underlying the film --- where we see the wonderful C.C. "Buddy Boy" Baxter looking after Fran, falling in love with her, while she painfully pines for another man who doesn't love her in the way she needs.
And before we get all serious, we have to remind ourselves of the premise. This is a film about a man who can't go home at night because the executives at work are using his apartment to entertain their mistresses. The set-up is a hilarious one. Its simplicity is also wonderfully complex-- and enables to plot to bend and shift in subtle, and masterful ways. 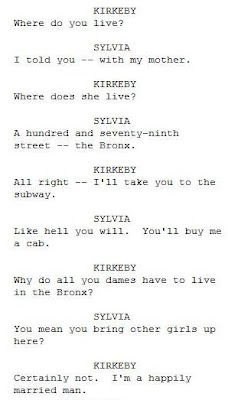 The screenplay is, for me, the greatest script ever written. I don't know if Billy Wilder and I.A.L. Diamond were on a direct line to God, or whether they were on some amazing drugs --- but whatever it was, they managed to reach for the stars and produce a document that is as beautiful, touching, poetic, and hilarious as anything ever written. The screenplay bounces into life the second you read it.

"On November first, 1959, the population of New York City was 8,042,783. If you laid all these people end to end, figuring an average height of five feet six and a half inches, they would reach from Times Square to the outskirts of Karachi, Pakistan. I know facts like this because I work for an insurance company --"
C.C. Baxter, Opening Voiceover.
I know that many of you love this film like I do, and many of you will never have seen it. I am also aware that many of you won't share my enthusiasm for it -- but I hope you will indulge me this week, as I attempt to dig deeper into the film, to work out why it was magic (at least, to me), and to also figure out why, on a personal level, I hold it so dearly. That's fascinating to me. Why do we watch some films a million times over? What IS IT?

Where we go, my place or yours?
Might as well go to mine - everybody else does.
If this post seems a bit clunky and all over the place, It's because it is. These posts aren't a know-it-all trawl of information and analysis -- they're a guy trying to get to grips with a movie he adores.  This is the week of 'The Apartment,' and I hope you'll stick around for it.
at 06:11
Share