After a long spell in this industry, actors tend to go one of two ways-- bitter and grumpy, or wise and inspiring. WILLAM DUFFY is one of those who took the latter path. This interview was originally going to be very short, but William's knowledge and wisdom on the industry and the craft of acting are as fascinating as anyone I've ever spoken to, and I know a lot of actors.  So we ended up talking at length about his career.
He's best known for his work as Larry on THE WEST WING; and has also worked on many other TV shows, which we talk about in this interview. 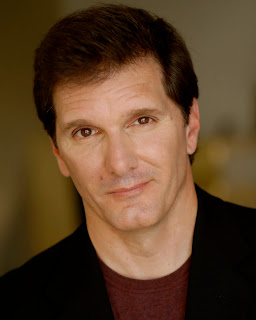 You have been acting for over twenty years -- What do you know now that you didn't know when you started?
Wow. How much space to do you have ? Hmmm, … there are a ton of things you learn as an actor over such a long period of time – both about yourself and about the business. One of the most important for me is: Don’t let being an actor drive you crazy. Especially with auditions. The nutty thing you learn, is that our success in this business (whatever that’s defined as), is almost completely dependent upon what other people think of your work – not necessarily on how talented you are. It’s why everyone has a different favorite movie, or actor, or director, or genre, etc. There’s no “formula” to success, or even booking a job. 2 + 2 doesn’t always equal 4 in show business, so you must learn quickly not to look for any logic. When I walk out of an audition – for example, I just had one today for a series regular on a pilot – if I know in my mind that I did at least an 8 out of 10 – which I think I did today - I’m happy, and I realize it’s now completely out of my hands. I did my part. If I feel I did 7 out of 10 or worse, I know I have no one to look to but myself, and I need to be better the next audition. Regardless, good or bad, I mentally walk away from it after it’s over. I NEVER dwell on the “W’s”: “Why didn’t they cast me?”, “What did I do wrong?”, “What were they looking for?”, “What did they think of me”, and of course, “Was I any good?” and “Will I ever work again?”.
I learned early on in my career to avoid these paralyzing questions because I know, for a fact, that they’re really unanswerable. How? Because early in my career in New York City, I think I did a smart thing: I was a reader for many casting directors. By sitting in that room with the “powers that be” I learned first hand: 1) What many actors do wrong in an audition room, and 2) that many times, believe or not, the best actor does not get the job. This latter one is a hard one to swallow, but very true. There are so many factors – subjective and objective – one’s so stupid you could not possibly imagine - that go into a casting decision, that you just can’t worry about it after you leave an audition. Learn to just go in, do your best, and let the rest take its illogical course !
What was the worst audition you ever had?
Hah, there’s too many to count ! It happens. We’re human. We mess up. Let’s see, early in my career, I remember auditioning for a 3-line role … and I said 2 of them wrong ! I’ve had auditions where they changed the sides to be read … and I didn’t know it. Uhhh … I once auditioned for a musical … but didn’t know that it was a musical (and I don’t sing) ! That was bad. I’ve lost my place in auditions. You try to be off the page with the lines as much as possible, but sometimes you just go blank. It happens. Oh God, one audition - I can’t say it was my worst audition – but it was memorable – was with a casting director (who shall remain nameless) who, after I finished what I felt was a really good audition for them, said to me, “Well, you seem smart enough to know when it’ll be time to quit acting.” … I’m serious. They actually said that. I was floored. I actually cracked up right in front of them and walked out. Needless to say, I did not book that job. … But about three weeks later, I did get the call that I was going to be recurring on “The West Wing”. (see part about “logic” in question #1 above !!)
I loved your character in 'The West Wing' -- but I am curious about what the experience is like to be a regular on a show, but to be one of the guy's behind the other guys. Is it frustrating not having bigger storylines?
Hey, we’re actors – we love the sound of our own voice ! Of course, the more lines the merrier ! No, seriously, I would have loved having more to say on TWW, but with 9 extremely talented series regulars having to be serviced, it was amazing to just be a part of it in any capacity. Many people wrote in, or wrote me asking to have more “revealed” about my character, Larry. Many even wrote in online forums about what they felt my “storylines” were. But as Aaron (Sorkin) once said, he saw Larry as representing many different people in the White House, not just one. The unique advantage to this, especially for a recurring character, like Larry, was that because TWW was such an ensemble oriented show, it allowed me to be written into many of the larger characters’ storylines, rather than just associated with only one of them. As a result, over the seven years, I had many scenes with virtually every series regular on the show. It was amazing to work with all that incredible talent. You learn so much. Would I have liked a few storylines ? Absolutely. But I would never trade in a moment I was on that show. For me, it was one of – if not the – best experience of my acting career so far. 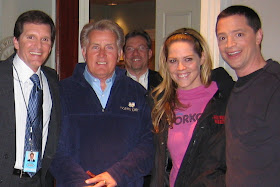 William with Martin Sheen, Mary McCormack, and Josh Malina (with Chris Misiano behind them)
What is it like coming onto an established show, like "Heroes" or "The Event" and being part of one or two episodes? Is it daunting, or just a lot of fun?
For me, it’s always fun. However, I don’t mean “fun” in a relaxed, kicked back, party time way. Make no mistake: it’s work. It’s my job. I can honestly state that I have enjoyed every day I have worked as an actor; regardless of the movie, television show, commercial or theater project. I mean that. I have NEVER woke up and dreaded heading to a set or rehearsal. Now, some projects have been easier than others, and I have to admit that TWW was the most professionally run set I have ever been on – especially given the extreme budgets and pressures we operated under – so I was spoiled for seven years. But it also showed me the importance of being prepared for other shows I might work on - so that it could be a fun experience. While I feel I’ve always had great work ethics, I did learn from my seven seasons on TWW to respect any show I work on. What I mean by that is, I rarely audition for a TV show without having seen at least one episode. Pilots and/or movies are different, but if I can watch something the director has done before, or read the entire script, I will. Too many times, on TWW, guest actors would not have done their homework and watched an episode of the show and/or become familiar with the rhythms of the show. It’s the same when I work on a different, established show. I want to know the feel of that show, so that when I walk onto that set, with actors - probably most of whom I’ve never met before, who already have that feel - I know I can jump right in, and know what role I play in that feel. THAT makes it fun. For me, it’s imperative. For some of my friend’s, they never watch TV, yet audition and/or work a lot. That would be daunting for me. To work on ”Heroes” was vastly different than working on “The Event” and I made sure I watched those shows before I even auditioned. (Thank God for the Internet ! ) I often relate it to sports: I like to know a bit about the stadium and teammates I’m playing with before I start. That way, I can have fun creating and doing my craft and feel at ease to even experiment a little. Again, I saw too many days where new actors had no idea how the specific rhythms of TWW operated – and it dragged the whole day down. I just can’t allow myself to even think that could happen because then the “fun” is gone.
Why do you think these people got hired? The style was so specific, I'm surprised these people slipped through the net. But then, I guess with so many episodes and storylines, you can't guarantee every actor is prepared?
Oh no, it wasn't a matter of slipping through any net. The casting directors did an amazing job of supplying incredible actors for each episode. Because don't forget, in an audition, you're 1) reading with one person - usually a non-actor - even if it's a multi-person scene, 2) you rarely read the entire role, and 3) if you're a big enough name ... you don't audition, you're just offered the role. No, casting had nothing to do with it. We, as actors, are responsible once we book a job to prepare as much as possible for the shooting. However, during the first couple seasons, while audiences (and actors) were getting to know this new "style" of show, it was a very different experience for any guest actor - regardless of their resume - to come play with us. I think most actors prepared, but they prepared like they would for other shows, and not for our show. It's kinda like, you may know how to drive your car really well around town, because you do it a lot, but you now put yourself behind the wheel on a five-lane highway in Los Angeles with everyone doing 70+ mph, and it's a whole new ballgame ! I was just always surprised when a guest actor really had no idea what was expected. And I'll admit, as the show gained it's immense popularity, and the style and expectations of Aaron's writing became more familiar to actors, there were less and less problems.