I'm going to have to insist you see it. It has the weight of a Holocaust movie. But then it would do because it's about people being sent somewhere against their will, and come the end of it they don't even know who they are anymore.
And it's all true. It's about the children who were deported from England to Australia from the end of the war up until as recent as 1970. They didn't want to go. They didn't get a choice. Apparently 130,000 children were deported from the UK. Can you believe that? 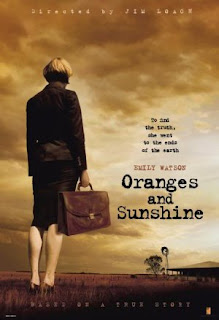 "you feel for us, 'cause we can't."
This is a story about identity. About being taken to another country and being made to work as a slave. To have one piece of clothing for your entire childhood as you work as a labourer. The English have blood on their hands. So do Australians. So does the Church. We're good at hiding this stuff.

It's directed by Jim Loach. You can't write about him without mentioning he's Ken Loach's son. But it's not important. This is Jim's film. He spent eight years working on it and developing it with screenwriter Rona Monro, and with Margaret Humphreys, who it's based on.

This film is why Emily Watson became an actor. She's never been better than in 'Oranges & Sunshine.' Not that she's ever been bad. Here she's at career best. You care for her because you care for her character, but also because she reminds you of you. So do the orphans as they try to face up to their history, try to face up to not knowing who their Mother's are. You relate to it because of how human they are. Some are broken hearted and weak, some put up huge walls and refuse to be emotional. It's just like me and you. 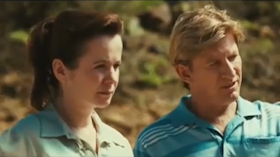 'Oranges & Sunshine' is gritty. Not in the graffiti-filled-council-estates kind of way, but in that it gets down to the nuts and bolts of life and corruption. The church was involved, the children's charities were involved, the governments were involved. This is why film is important. It teaches us what we don't know and it reminds us of what we do know. It's a mirror for our best and worst.

The film comes out in the UK in April and in the USA some time after. Hopefully the film will get distribution in other territories too. We'll see in they do a deal in Berlin. The world needs to see this film. Keep it on your radar.
at 15:30
Share