J. K. Rowling  had an idea, and saw it through. When that first seed on an idea came; did she know it was a ten billion dollar idea? I'm guessing not. Did she know she'd have the most successful books ever and most successful films ever? Probably not. In fact; if we could take a trip back in an battered old DeLorean, I think we'd find the usual mix of inspiration and self-doubt that makes up every creative project.

The Harry Potter films deserved the recognition. It's easy to be anti-Harry. It's easy to be cynical because of how much money it made. It's easy to moan about how it's one big franchise. But Harry Potter is something special. It got my little cousins into reading. Have you ever tried getting your little cousins into reading? The most they normally read is the back cover of an Xbox game. J. K. Rowling changed that. And the films were giant, epic fantasies, and they took millions of people along for the ride. They made stars out of unknown kids like Radcliffe and Watson; and they brought all the A-Listers together on screen too. 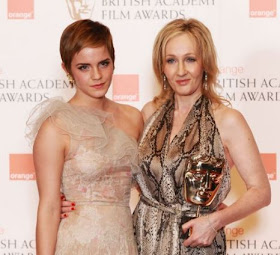 I just found this. "In 1990, my then boyfriend and I decided to get a flat and move to Manchester together. We would flat hunt every once in awhile. One weekend after flat hunting, I took the train back to London on my own and the idea for Harry Potter fell into my head. I had been writing since I was six, but I had never been as excited about an idea as I was for this book. Coincidentally, I didn't have a pen and was too shy to ask anyone for one on the train, which frustrated me at the time, but when I look back at it was the best thing for me. It gave me the full four hours on the train to think up all the ideas for the book. A scrawny, little black haired, bespectacled boy became more and more of a wizard to me. He became more real. I think if I might have slowed down on the ideas and began to write them down. I would've stifled some of those ideas."

The books got turned down. Harry Potter didn't get published right away. Those people out there saying Potter was not good enough are the same people telling you your script sucks, or you should give up acting, or your camera-work is all wobbly. HARRY POTTER GOT REJECTED. Remember that every time you feel down or low about your career.

J. K. Rowling was just a woman on a train who had an idea and saw it through. She had a vision of writing seven books and she kept to that vision. Sure, now she's rich and we can be cynical - but she's just a creative woman who created magic. But it's not magic; it's just words on a page.

Harry Potter was just a seed of an idea in a woman's head. THAT'S ALL. But now, we know more about Harry Potter than we do about our government. We can recognize Daniel Radcliffe but sometimes we forget the names of our relatives. Harry Potter is everywhere. It's not just a cash-cow, it's a real life example of dreams coming to life, in so many ways. And I can't get over the fact it was all created by a writer who sat on a train and had an idea. 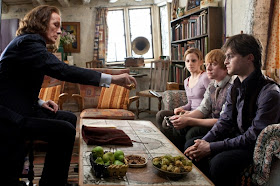 If you had been J. K. Rowling, on that train, and you'd had an idea about a kid with glasses who goes to wizard school-- I wonder, would you have seen it through? Would you have completed it? Would you have believed in yourself? Whether the answer is yes or no it doesn't really matter. It's just worth remembering the story of how Potter came to be. All of the directors, producers, financiers, marketing executives, actors, red carpet premieres, toys, screenings, etc -- it is ALL because J. K. Rowling sat on a train and had an idea.
at 03:47
Share