When FRIENDS Changed A Little

I'm watching FRIENDS from the beginning again. Don't you just love Friends? FRASIER was funnier, and cleverer, but it was the one about six New Yorkers that captured people's hearts. It was Chandler whose sense of humor influenced a generation and It's Rachel who everyone fell in love with. Say to a stranger in the street; "We were on a break!" or "Grandma's Chicken Salad" and they'll probably get the reference.
But something changed. Maybe it's just me who sees it but I'd imagine it's nearly everyone. There are a lot of establishing shots of the World Trade Center. They even used them in the credits. And now, they mean something different. What they mean, it's hard to say, but it isn't comedy. 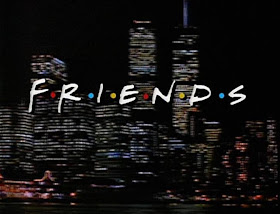 It's the strangest thing--- you can be in the middle of a hilarious episode, and then as they transition between scenes; you might see a restaurant, a street corner, and then there they are: the two giant towers. It hits you every time. 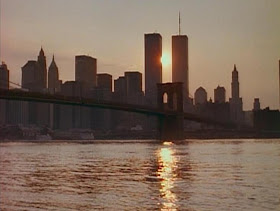 Would you want them to edit out the towers? Of course not. Does it make the show less funny? Not necessarily. Somehow, the films and TV shows that we love seem to always be changing. Our lives are always going in different directions, our relationships are always growing or falling apart or changing their meanings -- why would we expect anything different from our art? The world changes. What I'm talking about, I'm not entirely sure -- but almost every episode of Friends is different now-- you're hit in the gut for two seconds when you see the image of those towers. There's something extremely sad about that but there's also something very powerful, too. And of course, it happens in everything else you watch in more subtle ways. Every single day we're a little bit more happy, or a little bit more angry, or bitter, or inspired, or lonely, or sad, or courageous --- and when we change, so do the films and TV shows that we take on our journeys, they look a little different.
at 14:12
Share