"Johnny,  it seems we hardly knew you. We love you, and we miss you."
-Martin Sheen.
We were fortunate to get some poignant, adventitious glimpses of Leo McGarry -- some of John Spencer's finest work -- in episodes that were originally screened after the unexpected death of the actor who played him, John Spencer. As if by pure luck, John's performances in his final episodes are some of the finest in the history of THE WEST WING. But looking at his acting career, you realize: it has nothing to do with luck. John Spencer was always getting better, as an actor. Leo McGarry was his masterpiece. 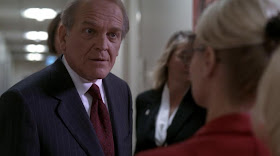 This week I have had the privilege of talking to Eli Attie, who was a Supervising Producer and Writer on The West Wing. Here's what he had to say about John.
"The West Wing had an extraordinary company of actors. Not typical TV actors, the people who move to LA as teenagers to primp and pose and become stars, but deeply serious actors, who had honed their craft in NY theater and were unbelievably dedicated to the process, to the work itself. John had spent decades in that world, and even among our great, great cast, he had a weight of experience, a way of owning his place in a scene, that was in many ways equivalent to the authority Leo had as White House chief of staff. His role was unquestioned. There was an accumulated strength and wisdom to John's acting. Some actors find their way to a performance; John knew precisely what he was doing from the first take, always. Like Leo, there was no room for stumbling around. And no need."
At the beginning of Episode 10, in Season 7 - the episode begins with Martin Sheen addressing the audience, and sharing the news that we would be witnessing the final few months of John Spencer's work. The episode that proceeded this statement was one of Spencer's finest. The Santos For President campaign was running out of patience with Leo McGarry-- who was stumbling over simple questions whilst rehearsing for the Vice-Presidential candidate debate, with the staff worrying over his health and ability to fulfill the role.

It's a heartbreaking episode because we see the powerhouse of Leo McGarry, for the first time in seven seasons; looking extremely vulnerable. He looks this way until the final moments when his performance in the debate outshines all expectations; and we (and his staff) realize he's been manipulating the media the whole time. This episode is a shining example of the brilliant complexity that Spencer brought to his work.
"I went to the small wake that his family held in New Jersey right after he died. Just a few of us made it; the weather was awful. It was my first Catholic wake, and as the tradition dictates, there was a big corkboard covered with family photos of John throughout his life. In his West Wing days, his face was like a novel--so much complexity and depth of expression. Simple reaction shots of John, while the other characters were talking, could tell as much story as the words.  And looking at that board, I remember thinking: he had that same amazing character actor's face when he was six, he was just waiting to grow into it. Which might be why his career really came alive later in his life."
John's final two episodes on The West Wing were a fitting tribute to the man - which is especially moving considering this was never their intention. Episode 12 of Season Seven was written by Eli, and featured a remarkable scene between Leo and President Bartlet (played by Martin Sheen). Of course, Eli Attie wasn't to know that this would be their final scene together; but we can only thank the Gods that these two wonderful men got to share the screen one final time. There was something powerful about seeing these two masters (fictionally, as characters, and in reality, as actors) on screen together. They compelled me and held my attention in a way so few can. I wrote about this in my previous article about the show, "They brought a gravitas; a weight, that you rarely see in television, or in life. We need them. They represent the type of leadership and eldership we all need, within our selves and from those around us." 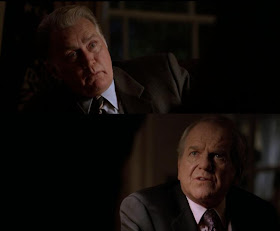 I asked Eli, "On screen; Leo had a real gravitas; he was an elder to those around him. Could the same be said of John Spencer?"


"I think on an acting level that was true, absolutely. Just in terms of age and experience, both Martin and John had that kind of gravitas, a very well-earned respect from the whole cast and production. But personally, I think of John as someone who was always laughing and joking, would always greet you with a hug--a more openly emotional person than Leo. Leo quite literally had the weight of the world on those shoulders. John could afford to be looser, more casual, more of a thoroughly creative spirit. John was an artist, after all, which I don't think Leo could ever have been, or would have fully understood."
The final episode that John appears in, is the first episode where Donna and Josh kiss. The Santos team are celebrating gains in the polls; and they are all in high spirits. We see a brief shot of Leo, in the mix -- and it steals your attention. There he is, full of life -- not only do we see Leo McGarry unusually happy, but we see a glimpse of the John Spencer that the West Wing crew knew, the artist and creative spirit that Eli just described. It's touching. It's only a couple of seconds -- but it's a more moving few seconds than most TV shows manage in their entire runs. 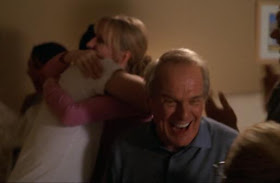 The episodes that followed dealt with the death of the character, Leo McGarry, which was made more real and emotional by the fact that we were mourning the death of John Spencer, too. For us, as viewers, it was deeply sad. For the cast and crew of The West Wing, they had lost a close friend. In some strangely poignant and beautiful way, it made for some of the greatest television ever made. But it also meant an end for the show.


"One of the reasons there couldn't have been an eighth season of the show, in my view, was John's absence.  When I think of that final run of episodes, dealing with Leo's death, and of course John's as well, I think of Brando in the final scene of The Godfather Part II. he's not actually there, but you feel his power, you feel the life-force that he was, and everyone is still reacting to him. John's death left a gaping hole in the middle of the show, a cavernous vacuum, and the rest of Season Seven was largely a reaction to that--a memorial to him and to the creative world he helped to shape and lead. So his death of course changed everything. I have a hard time separating the personal aspects--gathering to share memories at his home right after his passing, the wake and the funeral and the memorials--from the writing and filming of those final shows. We grieved through the work."
With thanks to Eli Attie.