I struggle with those blogs where people just ramble about whatever comes to their minds, do you know the type I mean? They post pictures of their cats and they give out "Most Fluffy Blog" Awards to their friends who have names like Deirdre and Marlene. But, as a change of pace; I figured I'd just write a blog without knowing what I'm going to say, and see where it ends up. I won't be blogging about my cats, because I killed them.

I've never owned cats, don't worry. I never even saw the show. I watched 'THE TAKING OF PELHAM 1 2 3' last night, that's the remake, not the original. I know we're meant to claim that remakes are the devil; but I'd never seen the original and this film I enjoyed. I'm not an action film guy. A few cars blow up and buildings explode. Great. But why should I care? But '..Pelham' was good. It had characters I cared about. This is what I need from an action flick.


1. A deadline.
i.e. Get me the money, otherwise your family dies.

2. Someone who wants to get it all over so they can see their kid again.
i.e. I need this to be over, so that I can finally be a good Dad to Little Billy.
3. Plausibility.
i.e. Don't have two guys running around shooting each other for two hours and end it with one of them suddenly inventing a phone that doubles as a ham sandwich, which poisons the bad guy, who suddenly announces that his ham allergy is deadly. 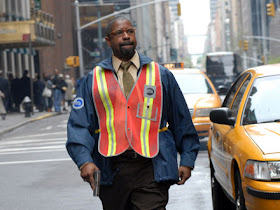 Now, PELHAM, as I'll call it now, did have a few plausibility issues, but I enjoyed it! It was in New York, it was gritty, it was fast. It had the dancing guy from the 70's shouting "Motherfucker!" a lot. Great stuff.

"JULIE & JULIA" is a good movie. It captures a different New York. It's the Nora Ephron New York. It's funny; on the making of thing on the DVD one of the producers says "This is a different New York to what Nora's shot before, it's gritty." Gritty? really? Just because there was a Pizzeria in it? It's hardly "DO THE RIGHT THING." Now that's a good movie. In fact; now I think about it -- Spike Lee and Nora Ephron are both very similar in that they draw you into their worlds. They make you care. They can have a fuckawful story but they get away with it; because they've wrapped you up and welcomed you into their worlds. They've put the heating on, they've made you coffee, and you don't want to leave. 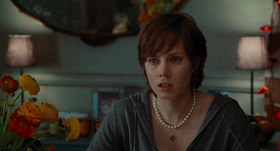 Julie Powell; as a real person, and as a film character; is really a great role model for success. She had a target which would test her. She had passion for something. She had a role model. And she worked her ass off. Her character spoke a lot, of feeling like Julie Child was in the room, and of having conversations with her as she cooked. To many, that sounds insane; but to anybody who wants to do anything extraordinary, it's the most normal thing in the world. Napoleon Hill was preaching that back in the day in his success books. It works. Unfortunately, I thought I was visualizing Billy Wilder in my imagination, but it was actually Bill Wiseman, from Barnsley, UK; who is currently unemployed and suffering from gout. Make sure you visualize properly.

With all this talk of movies set in New York, I should mention Woody Allen. I watched "ANYTHING ELSE" the other day. I love it! I hated it for a while, but on watching it a few days back I remembered that I actually love it, I just convinced myself I hated it after everyone said it was terrible. But I dig it. Sure, it sucks in so many ways and is a rehash of many past works. Woody was also clearly struggling with big changes in crew; this was the time when he was having to come to the realization that even though he'd had people willing to fund his New York movies all through his career, that was no longer going to be the case.

I am rambling. This isn't good is it? I will now write a paragraph in the style of a 48 Year Old Divorcee.

MJ emailed me. He wanted sex again. I just realized MJ has the same initials as Michael Jackson and some people think he isn't dead. What if it's him? What if he gets me pregnant? Would it really be his or would it be Macaulay Culkin's? F called. GH-N-Q didn't call. I was sad. I bought a Dicksonia Antarctica for the garden. It's so beautiful. N got the garden in the divorce, so I don't know where I'll put it. I'm so lonely sometimes. It reminds me of the time FB told me he wanted some. I thought he wanted a threesome with me and I. That was my fantasy, me and FBI. But it wasn't the case. He did want some, but not sex. He was after my Sasa Palmata. I told him the soil in his garden wouldn't be right, plus it didn't have adequate shade.

Anyways. I watched "SLUMDOG MILLIONNAIRE," too. I like Freida Pinto. I like the movie. I liked it more this time on DVD than I did in the cinema. The hype was so big then because I could hardly see the film on the screen; it was like there was some big giant sign in front of it say "OMG, THIS IS THE BEST FILM EVER!". That's why I didn't see "THE BLAIR WITCH PROJECT" for ten years.