I'm Just Out To Find The Better Part Of Me

I've always known where I'm going; it's the strangest thing. From as early as I can remember, I knew where my creativity would take me and I knew where I fit in. When people recommend a film or a writer to me; I know very quickly whether it is relevant to me as an artist.

I read a wide variety of books and am fascinated by numerous things in the world, but at the same time can be very narrowly-focused and disinterested in things around me. I might obsessively appear to watch any film that comes my way yet people will be frustrated when I show no interest in watching films they recommend to me.

I've always been very aware that life is not going to last forever. I have a limited amount of time to learn to be the best writer and director I can be. Therefore, engaging in my fascination with Woody Allen's career is helpful, or watching Aaron Sorkin's writing mature over the years is useful, but buying and watching every episode of CSI is meaningless to me.

I knew that I would be a writer/director and that I would make low-budget independent films long before anyone in my life knew what those things were. In the past I have turned down chances to direct music videos, or to write feature films for particular producer's, or to follow opportunities to make money working on film sets because I know-- they are not what I am here for and they'll distract me from where I'm heading.

I think it's important to know where you're heading. Even with this blog; I have absolute clarity in regard to what it is, what it does, and what it means to me. And if someone says "You should do more articles about horror films" or "Have you ever thought of writing more advice about film budgets?" I very quickly know my answers.

I think when I was younger, people saw my choices as limitations, perhaps even naivety. But for me, specialized focus is one of the key reasons I am able to follow the career path I am choosing. I knew with SO MUCH clarity last week that ADVENTURELAND is a great film; because I know what I like, I know what is meaningful to me and I know what I value as good writing, directing, and acting.

I know what drives me, what excites me, and what challenges me to do better. I can define it:

I like writer/director's. I like film's where we see the world through the eyes of a sole creator. I like that you can watch something and SEE Billy Wilder, or Giuseppe Tornatore, or Cameron Crowe. I like that they can make things more meaningful. I like the effect they have on me as a human being.

I've always wanted to do the same. It's what I value in film.

If someone gave me ten million dollars to direct a Hollywood action movie, that's very cool; and it'd be hard to say no, for sure; but it genuinely ISN'T what drives me.

This isn't a limitation, not in a creative sense; it's a big window into who I am and what my essence is. When I first saw A GUIDE TO RECOGNIZING YOUR SAINTS, I loved it. It spoke to me. As I researched further, of course, I found it was a passion project by a writer/director, Dito Montiel. Not a surprise, not a coincidence. This happens all the time. Likewise, I loved the movie 'Beautiful Girls.' This movie wasn't directed by the writer. But when I spoke to the writer, he told me that it was a passion project that he wrote in five days because it was burning inside of him.

This isn't a surprise, it's what I do, it's what I relate to, it's what I care about. THE WEST WING is my favorite show because it was Aaron Sorkin putting his brain down on the page week after week, and the reason I didn't like '24' was because it was about being cool and clever. The reason I adore ARRESTED DEVELOPMENT is because the creator had a way of indulging in his wacky, unique humor and sharing it with the world. The reason Charlie Chaplin is one of my biggest influences is because he is the epitome of everything I value in art, creativity and the movies.

I am not enthralled with trailers, or script pitches, or viral adverts, or factory-studio-movies-- not because I'm pretentious, but because; my interest comes from a different place. It comes from somewhere deep inside of me that longs to hear a voice that echoes truth about our world. Charlie Chaplin was the master at this. Likewise, people like Woody Allen and Cameron Crowe were able to capture their generations in ways so few people can. And it's not just that so few people can, it's that so few even try.

I am not about the quick idea or the 'cool' concept. I don't care what your story is about, I just care about why you care about it and how much of that is going into your work. I watched ADVENTURELAND the other day knowing nothing about it. By the end of the movie I was ecstatic because I'd found a piece of art created by someone who had to tell a story about himself, his life, his youth; and had managed to transform that into something universal and relatable to a bigger audience. This is what interests me and this is what I value and this is why I write blogs, write movies and direct films.

If I have no interest in your work or your DVD recommendation, I'm sorry, but life is short, thousands of films are produced every year, I have work to do. Put it this way; in the USA alone, over 500,000 people a year put their profession as 'artist' on census survey's. If we were to pay attention to all of them, we'd never get any work done. I need to focus on me, on what I'm creating. The people I collaborate with, get inspired by, steal from and aspire to be are only going to be a very select group. It has to be that way in order for me to be able to function and move forward as a productive creator of material that will be meaningful to me and, hopefully, the world. 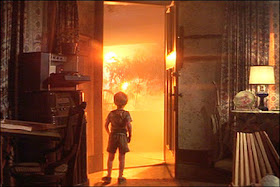